Very few people know this. Engineers at Lockheed’s secret projects Rye Canyon facility shot a radar at Magic Mountain’s Sky Tower, a rotating hexagonal compartment that ascends and descends for a panoramic view. The surprise? The tower was invisible to the radar.

And that is how engineers designed the Stealth Fighter with small flat triangular panels, all reflecting off into the atmosphere in different directions. If it had a rounded surface, the radar would pick it up. 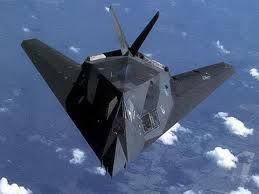 heavens. When Lockheed engineers shot radar across the valley to the Valencia recreation park, they got something that could be incorporated into sophisticated military technology. When you shoot a prayer up to Heaven, God may give you more than you bargain for.