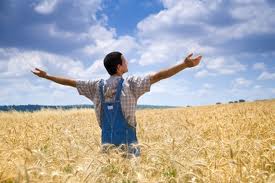 Isaac planted crops in that land and the same year reaped a HUNDREDFOLD, because the Lord blessed him. — Gen. 26:12 NIV (capitals mine). The prospect of this verse thrills the heart. You can a hundredfold increase, if and when, God moves.

Wow! That’s a lot. For every seed, Isaac planted, 100 grains grew. Normally more than one grain grows per seed — but not a hundredfold. This is the moment that Isaac got rich. The man became rich, and his wealth continued to grow until he became very wealthy — Gen. 26:13.

Let me make the following observations. This multiplication didn’t happen every time Isaac planted. He spent many years planting and reaping a regular harvest. But he kept at it, kept believing, and one day without warning, God super-blessed him. It was a sovereign miracle of God.

Which leads us to the following conclusions: God can bless you sovereignly at any surprising moment. Maybe you have been slogging along, faithfully serving the Lord for years (like Isaac), and when you least expect, He’ll drop a blessing bomb — and you’ll be sleeping in the cash. You’ll be preaching to the multitudes.

So today pray for a hundredfold multiplication. Look for it expectantly. Persevere until you receive it. Never stop believing.