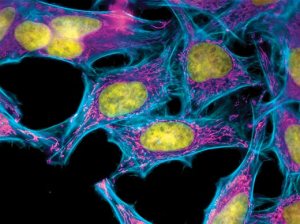 Normal cells cease to replicate at about the 50th cell division. Not so with the HeLa cells, which are immortal. Taken from a cancer from Henrietta Lacks in 1951, these extraordinary cells are cultivated in lab cultures and propagate endlessly. They have been useful in research for the polio vaccine, cancer, AIDS, and gene mapping. HeLa cells have given so much to humanity, and they just keep giving.

Shouldn’t Christians be like that? There are people who burn out on their donating. At some point, they get frustrated with the endless need for their finances and start looking out only for number one. There are pastors who weary of self-sacrifice for the good of others; they start doing more for me. After replicating about 50 times, they’ve had enough.

Let us pray for resiliency today. We should be the workers who “bear the heat of the day” and don’t complain to the Vineyard Owner about getting the same wage as the Johnny-come-latelies. He who stands firm to the end will be saved. — Mark 13:13 NIV. Don’t just start the race gloriously; finish it satisfactorily.

One response to “‘Immortal’ cells”