Enjoying In-N-Out afterwards is a Lighthouse sports tradition. Nate (rt) proved his Fall injury has not hampered his bursts of speed on defense.

Adrian and Rob were decisive 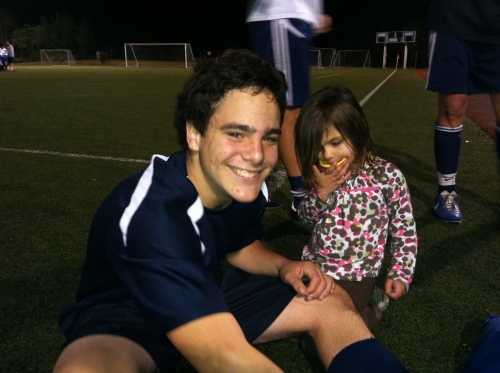 Tex cut surgically through their defense.

People are congratulating “my” 9-2 win last night. I just shrug. The truth is that “I” didn’t win with Lighthouse Christian Academy soccer.

The AD — Athletics Director, for those who don’t know the lingo — won the game. She scheduled it.

Pretty much all I did was shuffle our lineup so as to NOT score any more goals. In the first 20 minutes — one-fourth of the game — we had made 7 goals. So to lessen the humiliation for the other team, I pulled off good players and threw on beginners. I pulled attackers back into defense.

The lopsided victory was no coaching genius. It was guaranteed even before we started simply because we had superior players.

It felt like the gospel. God as AD schedules us trials that we are destined to win. We may celebrate on the field, but it was God who ordained everything to begin with.

To be sure, God schedules defeats for us too. To teach us humility, patience, effort, dependence on Him, etc.

You can have your cosmovision of universal randomness. I like being a Christian.