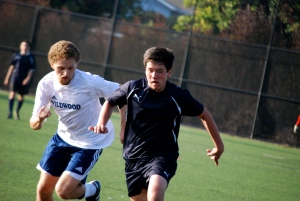 I’m no match for Rob, in blue, freshman on a varsity team.

Two months ago I konked my knee playing street soccer with my varsity team. At the time, it didn’t seem abnormal, not too bad on pain. I even kept playing. Later, however, it had a clicking that worried me. I consulted a doctor, and he feared a torn piece of cartilage was lodged in there. After two months, it wasn’t much better.

Then I got prayed for. The boys in my Sunday School class — called “Tweeners” — had just heard about faith and were pumped to pray. I am back to playing soccer! Jesus healed me! (Being able to play soccer is about as important for me as a U.S. president attending his own inauguration!) 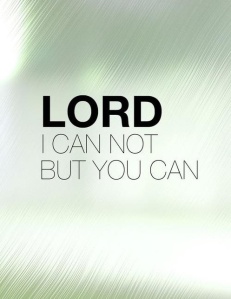 sincerity and innocence. And I say it’s good to be in God’s service, not matter how small or insignificant. Today I scored a goal in beach soccer against my son’s team! Ha! And at the end, we won! Ha!

As soon as the pros hear about this, I expect they’ll be heading to their local, Bible-believing church to cut their injury time.