Santa Monica prides itself as being among the top three anti-Christian cities in California. The others are San Francisco and Hollywood (along with West Hollywood). It is not enough for these cities to ignore Christianity; they feel some sort of moral obligation to hostilely oppose believers. 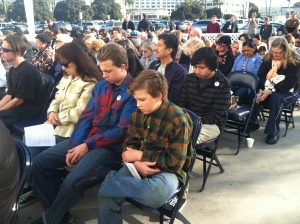 So it was here, on Santa Monica’s Civic Auditorium patio that the Christians prayed in this materialistic, this atheistic, this hedonistic city. Christians from all denominations, from all ages prayed. There were lawyers, doctors, firemen, police officers, priests and pastors, military personnel, business owners. Even dogs came and prayed — well, maybe I’m exaggerating.

Don’t think they were just old folks. Two high schoolers prayed for people struggling with suicide, sexual orientation and bullying. It didn’t stay with safe and dainty topics. It got real.

Mediating lawyer Harrison Sommer, a Jew converted to Christianity, prayed that we would have many National Days of Prayer. Yes. That is what this event was about: twisting the ignition key for many, many, many people to be inspired to pray.

To pray for revival, to pray longingly, lovingly. To turn off the cell phone and turn on the prayer phone. To strike up a conversation with Loving Father in Heaven. To seek an answer to the ills that afflict our nation (Boston, Newtown, abortion). To avoid war with North Korea and bring peace to the terrorists. There are no limits to what prayer can affect, no walls that can contain it.

Prayer may have been kicked out of the classroom, but only you can kick it out of your heart — by simply being distracted.

Find inspiration today and every day to pray.