Recommissioned by President Ronald Reagan in 1984, the USS Iowa saw action in the Persian Gulf War. Her frontward deck turrets make for impressive pictures, but their storied blasting power ceded to superior weapons: the Harpoon missiles.

When I visited the Iowa with my family on Memorial Day in the Los Angeles Harbor, a sailor told how he launched harpoon missiles to simultaneously strike from three different directions an Iranian oil rig where they were mining waters. The poor Iranian Guardsmen had no idea where the attack was coming from when three harpoon missiles all struck from different directions at the same time. It was that easy. Just program the computer and push the button. 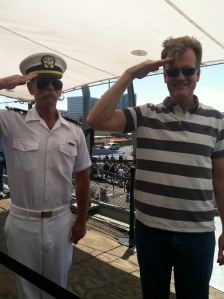 LOVE the mustache of this guy!

That sounds like prayer to me. 1) Program the computer = praying. 2) Push the button = God acts. And KABLOOM! The devil and his minions are annihilated.

The war goes on. So there is a continued need for prayer. In the Old Testament, Biblical authors used the imagery at hand to describe God: “He is a strong tower.” Well, in the age of technology, a tower is not very strong anymore. Maybe we should sing about God being our Harpoon missile system. 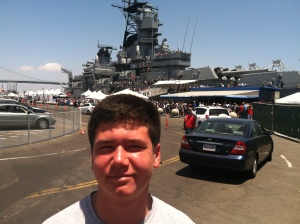 You don’t neutralize threats by sending Hallmark cards. You must pray:

The LA Fire Department’s firefighting tug for ship fires in the harbor put on a show for the Memorial Day tourists.

It would be ideal to live in world without war. But since terrorists fly planes into building to kill civilians for Allah-knows-what reason, there is war. Similarly, the devil is raging war, and we can only counteract his threat with spiritual action. He’s not interested in signing peace. He’ll sign peace only to get us to unilaterally lay down our weapons (prayer). He has no intention of ceasing from his hostile opposition to God’s kingdom.

Leave a Reply to I-Challenge You Cancel reply