Iker Casillas didn’t have to do anything to win! In the boring Italy-Spain Confederations Cup semi-final, Casillas just stood there on the penalty shoot-out that settled a sluggish 0-0 into overtime match. As a matter of fact, Italy’s goalkeeper Gianluigi Buffon didn’t stop a single shot either.

It could have been a spectacular show of goalkeeping prowess, but neither could stop any PK.

On a few penalty shots, Casillas dove. But after one cheeky Italian chipped it straight and center, he apparently decided to stop diving. He just stood there uselessly. The dives were pretty much pointless anyway because both teams drilled home unstoppable PKs. So Spain won 7-6 because Leonardo Bonucci launched his to the moon instead of the net. Here were the world’s two best goalies, and neither made a single save.

The penalty shoot-out reminded me of prayer. We can try. We can dive. But ultimately, the victory has nothing to do with us. Victory comes from above. Effective prayer does more than doing more. 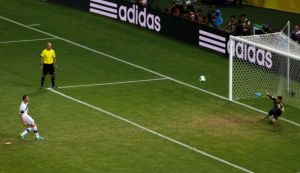 That’s why the overworked minister who neglects prayer commits a fatal mistake. He spins his wheels. The lion’s share of the work belongs to God Almighty, and the minister (not almighty) tries to do it.