Bats were the culprits behind the recent lethal Ebola virus outbreak in West Africa. It scared us.

Pigs were to blame for our return flight delay Saturday, getting sucked into the right jet engine. Out of the corner of my eye, I saw the flash from the wing. I heard an explosion like a tire blowout. It conjured images of the plane trundling off the edge of the runway and catching fire.

Welcome to standard operating procedure for Lighthouse Medical Missions. Since its inception in 1998, medical practitioners have attended to 50,000 patients. Well, that statistic is not correct anymore. This past week we saw another 1,400 — in spite of Ebola fears working in our minds.

Actually, the virulent hemorrhagic fever caused by Ebola prompted two-thirds of our team to take of the unusual step of evacuating on April 3.

The epidemic started when somebody ate a natural incubator of the virus: bats. Eating “bushmeat” is not on my bucket list, but to somebody in Guinea Bissau it must have seemed a delicacy, and that’s how the deadliest virus known to man roared onto the human scene, health officials said.

I stayed with 16 team members who decided to weather out their fears and stick with the original travel itinerary. I was just starting to breathe easy as the Brussels Airline jetliner was picking up speed on the runway. Then came the pop and a thud. Then the pilot slammed on the brakes.

The Lighthouse medical mission team in the Gambia 2014

“That was scary,” said mission leader, Dr. Robert Hamilton. It was an extraordinary admission for him because I have never known the Santa Monica pediatrician to be afraid of anything. It was Dr. Hamilton who persuaded us to stay in The Gambia.

And he was right. We didn’t get sick from Ebola.

And we were safe on the runway.

This was my first African medical mission with the Lighthouse group. As I interviewed veterans of these trips, I pondered the healthy dose of adventure and misadventure, the knack for getting into unheard-of predicaments, only to escape unscathed, as if cheating death.

Where is the borderline separating “dedicated” from “crazy?” 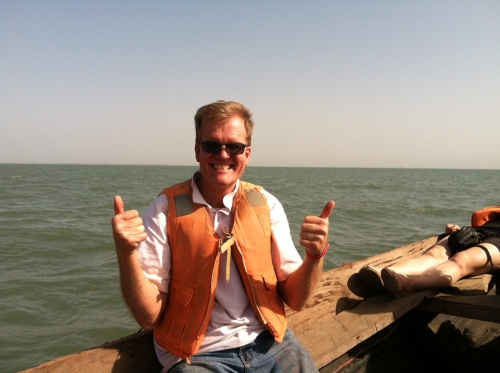 On The Gambia River.

Then I remembered Marco Polo. He made a years-long journey back from China to solicit capable missionaries to evangelize the Chinese, according to his book. After a year, only two dared to accompany Marco Polo, his dad and his uncle. But at the first rumor of war, the pair fled to Rome, leaving Marco Polo and his family to return alone. I realized we must continue to manage risk. After all, this IS Africa.

Prior to the trip, I had steeled my nerves for the worst gore medicine witnesses. On previous missions, doctors had attended to machete-chopped victims of civil war and even performed a mastectomy with only some lidocane injections. Like Joseph Conrad, I was prepared to say, “The horror! The horror!”

As it turned out, the cases were tame. In The Gambia, where half of the 45-member team worked, we saw mostly pain, fungus, malaria and worms. The other half-team traveled 100 miles by bus to Guinea Bissau and didn’t hardly treat anything worse.

One thing emerged to me as an eye witness. Lighthouse Medical Missions has an impact way beyond the temporary relief of 30 Motrin pills. By coordinating with local pastors, they essentially maintain field workers year-round who teach such principles as hygiene and household budgeting.

Because the pastors are Africans, they work at a fraction of what it would cost to maintain an American. They learn from U.S doctors and pastors and transmit it longterm to the local population.

On Sunday morning at the Lighthouse Church in Banjul, Pastor Alusine Kpewa was teaching on financial savings, a lesson virtually ignored by the poor of developing countries.

“I do not want the child of God to live all your life in debt,” said Kpewa (pronounced Peh-wah).

People can escape the syndrome of the eternally extended beggar’s hand.

As a fruit of twice yearly Lighthouse Medical Mission, there are over a 100 churches, concentrated in West Africa. They are ramping up operations. They have dug wells and founded schools.

So whether it’s bats or pigs harrying us, we must continue to take to Africa the love of God manifested in a practical way.

If you would like to participate with finances or volunteering, check out the webpage www.lighthousemedicalmissions.com . The ministry is a part of the Lighthouse Church and the Lighthouse Christian Academy. Virtually anyone can come on an Africa medical mission, but come prayed up.

This time it was bats and pigs. Next time, it will be something else.

This report first appeared on the santamonica.patch.com