Jepthah was run off by his brothers. He was an illegitimate son. When he became a man, he carried out great exploits, vanquishing Israel. But he never healed his hurting heart, and in consequence rejected his daughter. His lack of family love led him to a wrong-headed idea of an unloving God. He made a stupid vow (to sacrifice whatever came first out of his house to greet him when he returned victorious from battle) and instead of repenting and recanting his vow, he stupidly carried it out. He killed his daughter.

The greatest danger of rejection is NOT how lousy we feel. It is that we will do the same to others. As the saying goes, hurting people hurt people.

Supposedly, the church is a refuge for hurting people. Instead, it turns into a lair of cruel critics. I don’t leave the church because there is no where better to go. After all, Christ left His church. Nothing else.

I wish to be different: loving, accepting, patient, comprehending, optimistic with people, seeing the positive and not the negative.

Don’t think I’m touchy-feeling. The naked truth is I have rejected too many people in my time. God, forgive!

I am determined to change. I am determined to praise my children instead of criticizing them. I am decided to see good in everybody, to be patient with problems, to love the unlovable. It is not easy. I must pray every day before the day begins because, if not, bile flows from this wicked mouth of mine.

True change is not a glib meme or a mantra. It takes work and, I believe, divine assistance.

Do you fit in in church?

Photo credit: http://authordebbieyoung.com/2014/01/22/why-doing-a-jigsaw-puzzle-is-a-bit-like-writing-a-book/ (I don’t own the rights to this image, and I’m not making any money on it.)

A jigsaw puzzle piece decided he didn’t want to hang out with his brothers. He wanted to go off and discover his destiny elsewhere. Things were too rigid in the jigsaw puzzle. He wanted freedom. He knew that in the world he would make a huge splash and he didn’t need his fellow pieces.

And so, the beautiful picture had a glaring omission. Fellowship was broken, and God’s anointing, which flows where there is unity, was blocked. And the puzzle piece never was beautiful anywhere else.

God designed you for a purpose. You may have other dreams that can draw you away. You are most beautiful where God has placed you. Don’t drop out of church.

When I was young, I used to admire intelligent people….

When I was young, I used to admire intelligent people…..

He looked for donkeys, and God made him king 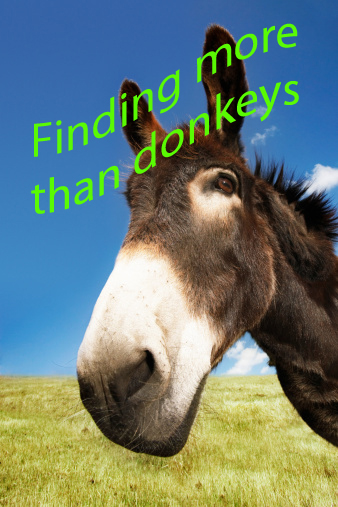 Saul was sent to find some stray farm animals. While he wandered searching, God found him and anointed him king of Israel.

You may be involved in the most prosaic business or ordinary life, and God is looking for you to give you the most extraordinary life.

Many people aren’t looking for God (maybe they’re trying to avoid Him). But God is going to find them.