ISIS releases 200 women from sexual slavery, including a 9-year-old whose pregnant from her captors 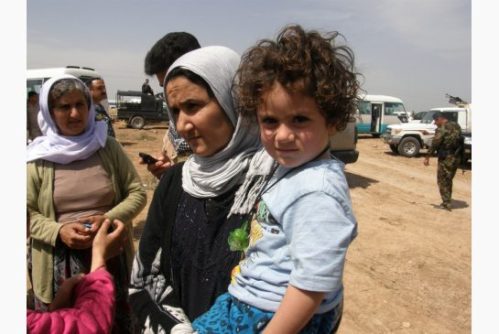 Yazidi women (not necessarily related to the story)

A raped and pregnant 9-year-old girl is among 200 Yazidi captives released by Islamic State fighters in an attempt to demoralize their enemies in northwestern Iraq, the Star world news reported.

Since last summer when the Islamic State rampaged onto the world scene, its jihadists massacred the men and subjected women to rape, forced marriage, torture and enslavement. After eight months suffering barbarism, the women and girls have wandered back to their relatives. They are traumatized and humiliated.

The 9-year-old is the youngest victim, according to international workers at refugee camps.

“This girl is so young she could die if she delivers a baby,” aid worker Yousif Daoud told the Star. “Even a caesarian section is dangerous. The abuse she has suffered left her mentally and physically traumatized.”

[Editor’s Note: Please forgive the horrific content, but I include it because I wrote it for God Report’s and because awareness is part of the solution. To read the rest of the story, click here.