Out of poverty in Detroit, to lauded surgeon, now presidential candidate, Ben Carson

As a teenager, Ben Carson and a friend were arguing over a choice of radio stations. Things got heated and Ben took out a pocketknife and lunged the knife blade toward his friend’s stomach.

The blade hit his friend’s belt buckle, broke in half, which saved his friend from harm and Ben from becoming a murderer. Frightened by what nearly happened, Ben ran home and locked himself in the bathroom with a Bible.

Ben turned to the wisdom of Proverbs, reading “A gentle answer turns away wrath, but a harsh word stirs up anger” (15:1); or “An angry man stirs up dissension, and a hot-tempered one commits many sins” (29:22), and a final admonition, “Pride goes before destruction, a haughty spirit before a fall” (16:18).

Humbled by the power of God’s Word, Carson realized that if left to his own devices, his anger would drive him toward ruin. Instead he prayed that God would help him control his temper instead of letting it control him, and God answered his prayer.

“When I came out, my temper was gone and I’ve never had a problem since,” Carson revealed in a talk he gave to the LifePoint Assembly of God in Osceola, Iowa, as reported by The Des Moines Register.

He chose instead to live by the words of James 1:19-20 which says, “Everyone should be quick to listen, slow to speak and slow to become angry, for man’s anger does not bring about the righteous life that God desires.”

The retired neurosurgeon – who has inspired millions to overcome adversity with his book and movie Gifted Hands – is now campaigning for the Republican presidential nomination – the only African American running in either party this voting season.

Read the rest of the incredible story. 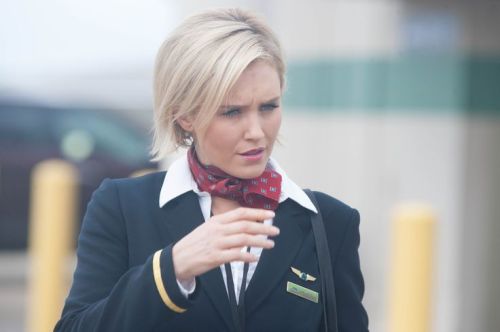 The fateful stewardess from “Left Behind.”

Yes, all babies and children will be taken in the Rapture — as will all believing Christians.

It hit me as I was watching “Left Behind” with Nicolas Cage. Babies have no consciousness of sin, no guilt of sin, no need for forgiveness from God. As we grow up and grow aware of right and wrong and willfully chose wrong, we then need a Savior. If we refuse to receive Jesus, we don’t get right relationship with Jesus. We miss out.

Yes, I believe in the Rapture. I’m not going to treat the subject here. Suffice to say that the New Testament’s repeated warning that Jesus is coming like a thief in the night doesn’t seem to fit any other eschatological scenario. If you don’t believe, you will be left behind.

From all ages, people will be instantly resurrected to Heaven. But from one age — that of early childhood — all will be taken. That is the lost generation. There will be no children on earth within that age.

I am late in finally seeing this movie. Don’t be late in accepting Jesus into your heart as Lord and Savior.