He didn’t want to play. Then he scored a touchdown. 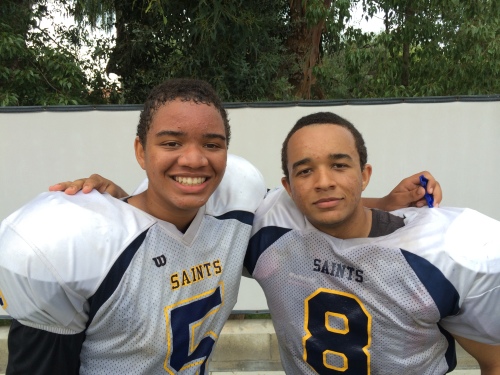 Shane at right, with his “little” brother, Justin.

Berry bolted off the Seniors Anonymous list Friday with his first touchdown against Westmark School in Encino.

Seniors are the bread and butter of varsity high school football. Two years ago, Lighthouse Christian Academy smashed into the playoffs because of five seniors. This year, three seniors have carried the team – and two of them are struggling with injuries. At game 7,  the Saints are still winless.

But on Friday, Shane used his big basketball hands to snatch a ball out of the air and scrambled wildly for a touchdown.

“It was great,” Shane said. “The rush when you get a touchdown is spectacular. I didn’t expect it, but when I caught it, ran right to the End Zone, I was like, ‘Oh my God! My first touchdown.’ It was a great experience.” Read more: Santa Monica football.