This happened by chance, of course 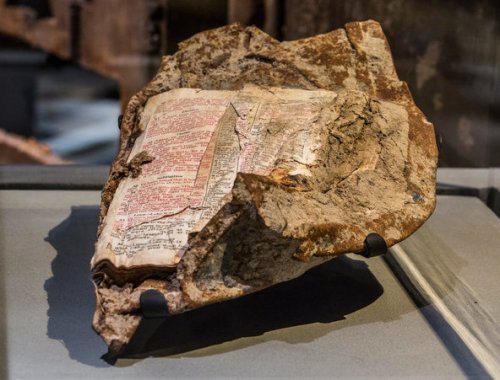 From the New York Times.

Of all the pages in the Bible, the one on forgiveness was “fossilized” in steel at World Trade Center Towers at 9/11. No, there’s no God, and He wasn’t giving a message to America, an erstwhile Christian nation. Missionaries should not take up the call to bring love and forgiveness to the languishing lost in Islam. It is all a coincidence, according to non-believers.

I have copied the article from the New York Times without altering a word, which if you were so inclined you can find here:

“Ye have heard that it hath been said, An eye for an eye, and a tooth for a tooth: But I say unto you, That ye resist not evil: but whosoever shall smite thee on thy right cheek, turn to him the other also.”

So many chapters. So many verses. But these were the words — from Jesus’ Sermon on the Mount, in the Gospel of Matthew — found permanently exposed at Ground Zero after the Sept. 11 attacks. The pages of the Bible in which they were printed had fused to a chunk of steel as the World Trade Center collapsed, to be found only months later.

The artifact is to be shown to Pope Francis when he visits the National September 11 Memorial Museum. It was given to the museum by the photographer Joel Meyerowitz, whose book “Aftermath: World Trade Center Archive” is the definitive pictorial chronicle of the months following the attack.

A firefighter found the fragment in March 2002, under the Tully Road, a temporary truck route that covered the last remnants of the south tower. He called out to the photographer, who happened to be nearby.

“This shredded, burned and rubble-covered Bible came to me from the loving hands of a fireman who knew that I was the record keeper of ground zero,” Mr. Meyerowitz said Thursday in an e-mail from Italy, where he now lives.

“My astonishment at seeing the page that the Bible was open to made me realize that the Bible’s message survives throughout time,” he said, “and in every era we interpret its teachings freshly, as the occasion demands.”