A sacrifice of praise is not a sacrifice

The Bible calls it a sacrifice because we offer it to the Lord as an expression of our gratitude. But it brings such joy that it is hard to think of it as a sacrifice. While it pleases God, it transforms the person who is praising.

*Original Image: Jason Ashimoto. I don’t own the rights. I’m not making any money on it.

Christ on the football field? 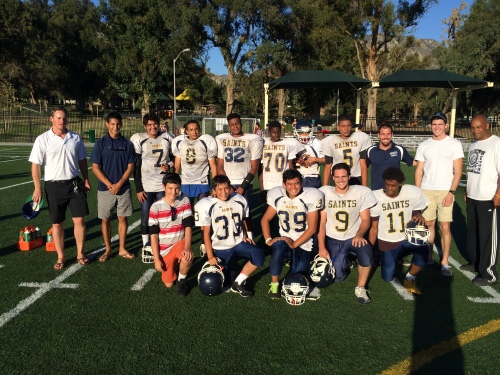 Like Christ, he hazarded his life to help his buddies win.

And the Saints won 54-15 against Concordia High School of Sylmar, their first win of the 2015 season – thanks to a 200-pound senior who was already injured.

The Cougars were the first to score.

“They were just moving the ball. We couldn’t stop them,” said Coach Zach Scribner. “I don’t know what it was. They had too many beefy guys. They just kept pushing the line. Rob (Ashcraft) basically stepped up and said, ‘I’ll go in, and I’ll play on the line.’ And we stopped them.”

Rob – named after Lighthouse schools founder Pastor Rob Scribner, the former LA Rams kickoff returner – had been injured on Sept. 11 in a game against Rolling Hills Academy. The risk of further injury was high to step out of the field.

But this was his senior year, a last chance to grab glory and make memories – and his team needed him. So Rob, with a torn ACL, gave it all. He made one touchdown reception and threw as quarterback another touchdown pass.

In the third quarter, his leg gave out, and he collapsed.