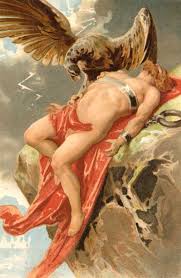 There is a certain attraction to being a provocateur. Lord Byron intrigues with his idea of the Satanic Savior in his poem Prometheus, in which he describes the human condition as suffering.

To his own peril, Prometheus violates Zeus’ command and gives fire to humanity to help him on Earth. The parallels are obvious: It is the Serpent who gifted mankind with what God, the Great Party-Pooper, selfishly denied to humanity (in the Biblical account, knowledge of good and evil).

But the comparison breaks down. First, Prometheus truly wanted to benefit mankind; Satan wanted to destroy mankind. Second, Prometheus wanted to give mankind what was beneficial; Satan, what was harmful. Third, Zeus feared an uprising of mankind much like he led against the Titans and thus wished to deprive man of fire as a weapon; God, only loved mankind and wished for voluntary corresponding love.

Students go giddy as they drink the intoxicating idea that rebellion is not only fun but right. However, it might be good to 1) consider the dissimilarities and 2) examine Byron’s life and fruits to meditate on the wisdom of following his life philosophy.