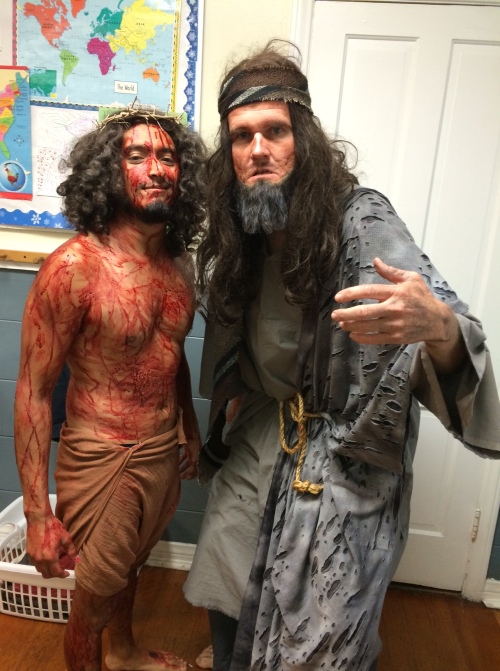 Chilling with my bud, Jesus.

No, Barabbas didn’t have snot dripping from his nose. For two years now, I’ve played Barabbas in the Easter play, and the directors tell me to act like a psychopath. Apparently, this comes naturally to me. Yeah, Miko the Psycho.

But I can’t find this reading in my Bible. Barabbas was an insurrectionist (one Gospel calls him a murderer, but the other explains the context more precisely)  in the scattered uprising against he hated Roman Empire. As such, he would have been something of local hero, much like George Washington or Thomas Jefferson.

So when the multitudes chose Barabbas over Jesus, it wasn’t an irrational act. Both were wildly popular with the people, so Pilate shrugged.

Barabbas was, however, a polar opposite of Jesus — not the demon-possessed against the Spirit-possessed. Rather, the earthly Savior vs. the heavenly Messiah. 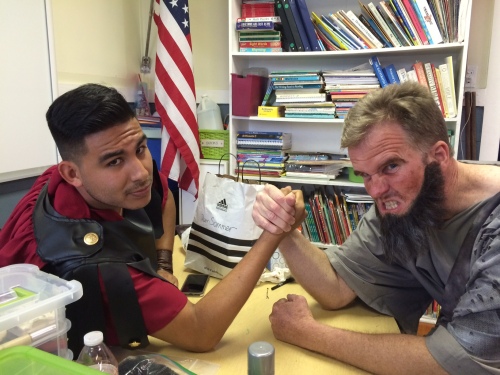 Barabbas is always taking on the Roman Empire. Do you like the realistic background? It’s the Lighthouse Church School. We used a classroom as a dressing room.

At the end of the day, Barabbas’ utopia was only going to be on earth. It was only going to be temporal. After the Romans, another empire would come and smash Palestine. Such was inevitable because Palestine was a crossroads connecting three continents, a bridge where the newest conquerors had to pass.

So Barabbas was more like Obama, trying to bring a better world. This is a good thing. I’m not deriding it. But some people are so busying focusing on making this life wonderful that they forget there’s another, eternal life to work for.