They’re not really “stressed out.” Twenty One Pilots is reaching out to lost youth

Top Ten Christian band Twenty One Pilots declared its musical manifesto three years ago in the song “Car Radio,” “I will try with every rhyme to come across like I am dying to let you know you need to try to think.”

Twenty One Pilots’ hit “Stressed Out” is currently played on secular radio stations across the country and in Europe, and the duo is selling out concerts at every venue. Even though they are open about their faith, the band continues to sneak like a hacker through the world’s default gospel-rejection mechanism.

While the dialectic voice confuses secular reporters, the message of salvation carries through to their listeners. 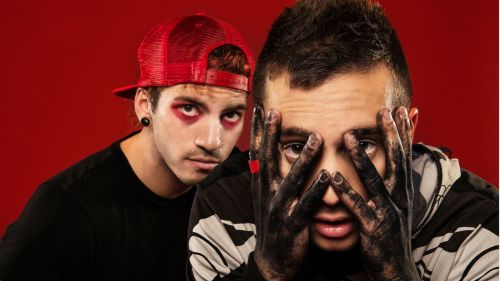 Tyler Joseph SAYS the black makeup on his hands symbolizes oppressive stress. But it’s likely more a symbol of sin for his adopted touring persona “Blurryface,” who is a representation of the Romans 7 alter ego.

“When I first listened to their music I was like, I’m not alone. I thought I was the only one,” wrote Mattie on a fan site in August 2015. “Twenty one pilots really did save my life in more ways than one.”

Twenty One Pilots is a genre-melding duo composed of vocalist Tyler Joseph and drummer Josh Dun, both 27-year-olds from Ohio. They attended Five 14 Church (as in Matthew 5:14 — “You are the light of the world”) in New Albany, just outside Columbus. Josh now lives in Los Angeles.

The band was formed when Tyler ditched basketball in the eleventh grade to become a musician. He tore through learning piano to bass and ukulele. 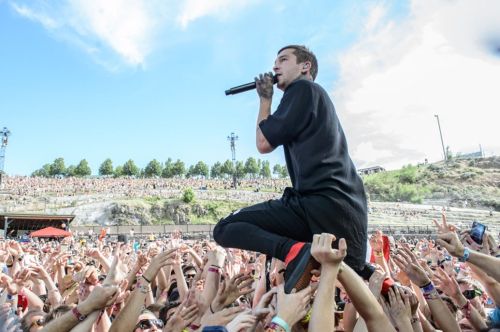 “I had identity issues. I didn’t like being the guy who played sports,” he says in a YouTube interview. “So I set up a microphone and a little studio. My mom’s trying to do the dishes and she hears her son screaming his head off down in the basement trying to record vocals, and she’s gotta be thinking, ‘What the heck is going on with him?’ So they were really confused.”

Tyler’s crazy dream is today paying big dividends, not just in terms of downloads and crowds, but also in terms of souls. Their angst-riddled lyrics are resonating with Gen-Y’ers and Gen-Z’ers, showing them a way to hope and faith.

While “Stressed Out” is an innocuous ditty about young adults yearning for the carefree days of childhood, other songs on their two albums – Vessel and Blurryface – pack plenty of gospel punch.

The duo signed with a secular label (Fueled by Ramen) and gets played mostly on non-Christian radio. But make no mistake. Though subtle at times, they are unequivocally Christian. Read the rest of the article.