The High and Mighty dwells with the lowly of heart

After going 16 chapters of pure encouragement (40-55), Isaiah retakes the issue of Israel’s sin: His watchmen are blind… they are greedy dogs… Come ye, say they, I will fetch wine. (verses 10-12). In the previous chapters, Isaiah has lifted his prophetic vision beyond the immediate future to a time of a return from exile. But now it seems he looks even further into the future, into the time when Jesus is born and the Jewish leadership is corrupt.

Then comes what is arguably the greatest gem of the entire book: Thus says the High and Lofty One that inhabits eternity, whose name is holy: I dwell in the high and holy place, and with him of contrite and humble spirit to revive him. — Isaiah 57:15. This verse is more than just a passing comment. It seems a crowning moment for a book that has been fascinated with up and down from Isaiah 6 onward (in which the prophet sees God high and lifted up in His heavenly temple). The paradox of dwelling on high and on low at the same time works the power of the sonnet’s concluding couplet.

All this is to say that humility is crucial in Christianity. You must be humble to even receive salvation, to believe in Jesus. And we must remain humble ever afterward. If we go prideful, we go without God. Stay humble, and He stays with us. 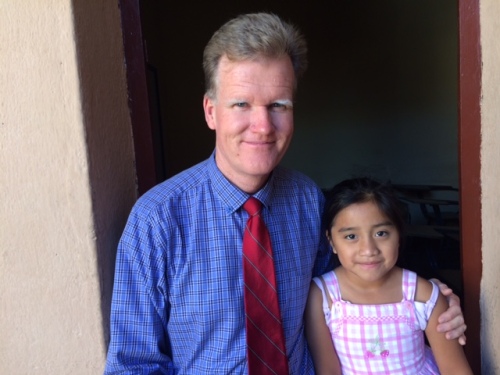 I was the little guy who couldn’t do anything significant for God. Twenty years later, there’s a church and a Christian private school in Guatemala.

I like the word “hewn.” Look at the rock from which you were HEWN, and the to the quarry your cut out of… Abraham your father… I called him when he was alone and blessed him and increased him. — Isaiah 51:1

The present tense of hewn is “hew.” I’d never heard that before. “Hewn” means to be cut out of. 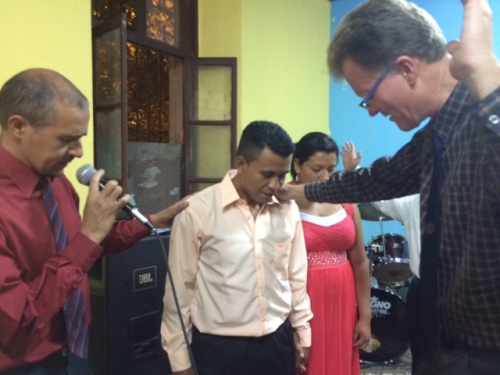 This is Ibis and his wife. He was so shy and quiet. Now he is making big decisions for Christ.

God encourages the Israelites (who see Abraham as HUGE) to regard Abraham as SMALL in his beginnings. Indeed, Abraham didn’t have any children until he was 100 years old (and his wife was 90). Yet God had promised to make a nation out of him. Talk about feeling small. And not up for the task.

With some “little guys” at the Liceo Bilingüe La Puerta.

Despite such an inauspicious beginning, Israel did become a great nation. It still is with Jews scattered over the world.

God is encouraging the Israelites — at a time when they are rebuilding their nation and are small and insignificant — that they will be able to do the impossible, to re-start their nation.

In God, small things lead to big. And you should never flag in faith because you are looking at your circumstances. Look at Abraham.