As a teenager, he was lured into a Japanese crime syndicate known as yakuza, and after surviving several violent episodes and prison experiences, God began to get his attention.

“I admired the yakuza for what was visible only on the surface,” Tatsuya Shindo told CNN. “They have lots of money, spend their money lavishly, and play glamorously. The bad guys looked so cool in my eyes. I was a child. I didn’t think too deeply.”

Many of the estimated 50,000 yakuza fall into a life of crime because they come from broken families. The yakuza cultivate a sense of family, of belonging and of loyalty.

But if there were issues that seduced him to the mob life, the harsh realities began to pummel him.

“People were killed in power struggles,” he recounted. “People’s legs were shot. A guy who was doing drugs with me died of intoxication. Suicides happened. Sudden deaths. I’ve seen many deaths,” said Shindo, 45. “I saw my henchmen get stabbed to death.”

He got addicted to crystal meth. He crashed his boss’s car while driving under the influence. As a result, his pinkie finger was cut off with a chisel, which is a form of penance in the syndicate. For a first offense, the wrongdoer must cut off the tip of his left little finger and give the severed portion to his boss. 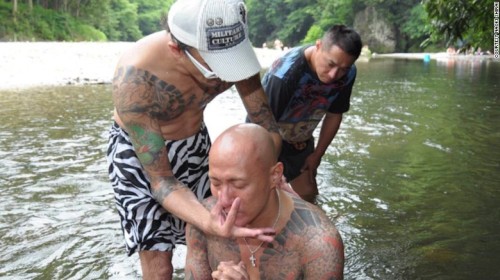 Shindo’s body is covered by tattoos, which make him an outcast in Japan. Many yakuza have full-body tattoos, which are still “hand-poked”, with homemade tools using needles made of bamboo or steel. The painful process can take years to finish.

Crime members cover their tattoos in public, but when they play cards with each other they often remove their shirts to show off their creative designs.

Beginning at age 22, Shindo was arrested seven times and imprisoned three times, according to CNN.

He saw his mob boss killed and friends die of overdoses. After his third prison sentence, he began to question the “lavish life of the yakuza” he once imagined. He finally decided it wasn’t all it was cracked up to be.

During his final 10-year prison sentence, Shindo began reading a Bible in solitary confinement.Read the rest of the article written by a Chinese student at our Santa Monica school.