A bag of cheetos defeated our soccer team 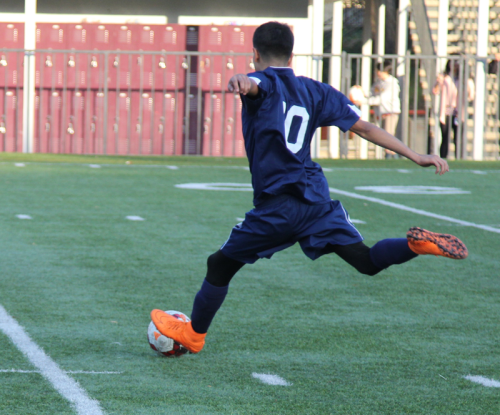 Lighthouse’s potentially playoff-deciding loss to Newbury can be blamed on a bag of flaming hot cheetos.

That’s all one player ate all day before the game.

The Saints matchup on Feb. 7 promised to be high stakes challenge. Newbury Park was last year’s league champs that LCA managed to upset this season 2-1 with energy and sheer force of will in the first matchup. The Gators would be seeking revenge for the “humiliation.”

So how did the Saints prepare?

Some players didn’t eat enough, and so they ran out of gas in the second half, allowing a 3-3 tie turn into a 3-5 loss. One player showed up with football cleats, a disqualifying violation.

The mind-boggling frustration behind Santa Monica’s Christian school soccer loss is actually a teaching moment. Lighthouse Christian Academy drills not just cognitive skills (how to ace college entrance exams or learn calculus). With a view to successful life, LCA teaches non-cognitive skills: how to show up on time every day, how to be responsible.

In other words, LCA gets the knuckleheadedness out.

“In the first half I did good,” the cheeto-eater said. “But in the second half, my stomach started to hurt.”

The pros on a wide pitch run 5 miles in a 90 minute game. Of course, high schoolers in 80 minutes of play on smaller fields don’t manage quite as much. But still, you burn a lot of calories. Even if you haven’t taken the requisite health class, intuitively you know to eat carb rich food (not fatty, greasy or sugary) before the game.

One bag of cheetos simply is not filling up the fuel tank.

In some ways, LCA’s rematch against Newbury was everything it promised to be, a back-and-forth thriller between similarly skilled teams battling for second place and the coveted playoff berth.

The Saints were first to score at 15 minutes. Erhan Meric sent a through ball to the left corner that junior Abraham Morales sprinted to. He juked a defender to get in the box, and as the keeper came out for the onoe-on-one, Abraham chipped wide of him to the far post.

In the second half, Abraham threw in a ball looking for a Saints player, but a Newbury defender, instead of clearing it, headered it in to the goal. The game was tied 2-2.

Then Hosea was blind-sided by a double body check from opposing sides causing him to spin in the air just inside the box. Taking the penalty kick, Erhan sent the goalie left and shot right.

That’s when LCA started running out of gas. Read the rest of the story.