This is the story of how God inspired a lowly janitor at the Frito-Lay factory in Rancho Cucamonga to create “Flamin’ Hot Cheetos,” propelling his rise to the top of the executive ranks.

Richard Montañez grew up in a farm labor camp picking grapes in California. He grew up with his family crammed into a one-room shanty lacking basic indoor plumbing — the communal bathroom was outside. They couldn’t buy luxuries and sometimes went to bed hungry. His was a life of food stamps, welfare and even times of homelessness.

Without any education, he salivated for the opportunity to work at the local Frito-Lay factory scrubbing floors. When he got the job, his father and grandfather sat him down and exhorted him to execute it with excellence.

“When you mop that floor, you let people know that a Montanez mopped it,” Montañez told WKNO television station. “In my heart, I was going to be the best janitor that Frito-Lay ever had. I saw that I had an influence because they would walk into the break room and it would smell fresh and they would smile.”

Then someone shared the gospel with him and his wife, Judy.

“I never felt like I belonged. I always felt like I was an outsider, like second-class citizens,” he told the Faith with Flavor program. “Then somebody started telling us about Jesus Christ. I wanted that so bad. We were never going to be picked for anything. Why would God take the time to deal with somebody like me when nobody else would? We figured we’d give God a chance. He was doing things for me before I could do anything for Him.”

He started reading the Bible and learning from his pastor, from mature church members and from mentors. 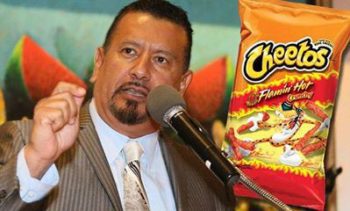 “I started going to church. It’s so full of wisdom,” he said. “If you read the Bible, it will educate you.”

Then one day at work, the president gave a lecture about empowerment. He told all the employees to think and act like they were the president. This was the message Montañez longed to hear. He looked around at his co-workers and was surprised that they didn’t seem to care much for the inspirational speech.

Montañez was praying one day for an idea, a vision that would help him break out of poverty. He took his small son to eat elotes, corn on the cob that Latinos cover with chili, cheese, lemon and other condiments. As he munched on the chili-coated elote, he thought of the puffed-corn snacks that his factory coated with powdered cheese.