Is that you, Messi? 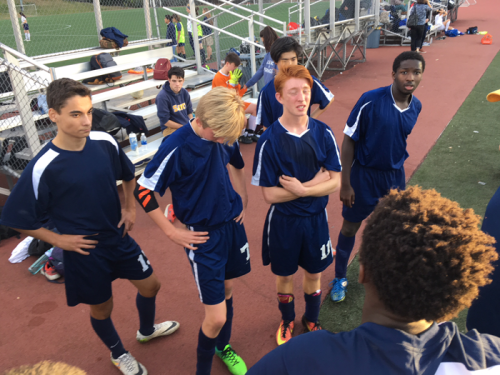 The singular sensation of watching Erhan Meric, who led Lighthouse Christian Academy to a 6-3 victory over Pilgrim Lutheran yesterday, is that one is witnessing the sublime soccer of a type of Messi.

He has Messi’s slight frame, his shyness and unselfishness. Erhan’s never boisterous, not given to braggadocio.

But when the ball falls to his feet, expect to hear an exquisite symphony.

Erhan, a senior at Lighthouse, is unobtrusive on the field. He lurks in open spaces and projects the image of the most unthreatening player.

But when he carried the ball up the right and single-handedly threaded his way through three defenders to slot on goal in the early minutes of the game, he put on notification the other team — indeed, the whole league — that he is not a man to be underestimated.

Erhan scored three and set up one. His header off a Beckham-perfect free kick brought the fourth goal in the second half in the Glendale Sports Complex.

And the good thing about this years Saints varsity team is that Erhan is not the only star. Actually a lot of technically skilled players combined yesterday to overwhelm Pilgrim Lutheran.

“We had good passing and good pressure,” said Coach Jack Mefford. “It was an exciting start to a promising season. We have a lot of new additions who know how to play soccer from the Bowens who grew up in Africa playing soccer to Shun (Fukushige) and Aki (Akihiro Oku) who played in Japan.”

Marcus Scribner, a sophomore, proved a bunker buster on offense, putting his football physique to good use against defenders. He scored two goals.

“Marcus’s two goals show how much he has matured because he struggled to finish last year,” Mefford said.

Aki, a junior, scored one, and Shun launched the goal-scoring free kick – a work of art – that connected with Meric’s head and past the hapless goalie. Read the rest: Saints soccer Santa Monica.