Fast and Furious star, no doubt, driving fast in Heaven

Just before The Fast and Furious star Paul Walker crashed and killed himself, his father admonished him: “No more daredevil stuff.”

While the steel-eyed Walker loved adrenaline driving in movies and in real life, he was less reckless with his soul.

“I’m a Christian now,” Paul Walker Jr. told USA Today. “The people I don’t understand are atheists. I go surfing and snowboarding and I’m always around nature. I look at everything and think, ‘Who couldn’t believe there’s a God? Is all this a mistake?’ It just blows me away.”

On Nov. 30, 2013, Walker was executing a high-speed “drifting” turn in Valencia in his Porsche Carrera GT when he slammed into a light post and tree. The car burst into flames and the celebrity died “within a nanosecond,” according to one account.

He exited this world, leaving the hearts of hundreds of thousands of adoring fans. He roared into Heaven, no doubt, at speeds he could never imagine.

Walker — who played the levelheaded Brian O’Connor in the The Fast Furious franchise — was born into a Mormon family in Glendale, CA, but was sent to a born-again Christian school, Sun Valley’s Village Christian School, from which he graduated in 1991. At some point in time, his convictions changed from those of his parents and he sided with the teachings of his school. 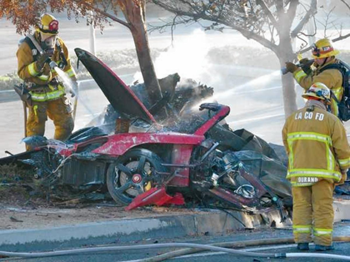 His first acting gig was for Pampers diapers when he was a toddler. He studied marine biology and developed a passion for sea life. His grandfather raced factory cars for Ford in the 1960s, and Walker apparently inherited the speed demon from him.

Until his breakout role as the level-headed Bryan O’Connor in the $5 billion grossing series The Fast and Furious, Walker featured in small parts in Highway to Heaven, Who’s the Boss?, The Young and the Restless, and Touched by an Angel.

A “fun, funny and carefree” guy, Walker was liked by his fellow actors, his former schoolmates and his millions of fans.

He loved surfing, tagging sharks for study and jiu-jitsu.

He also cared about suffering around the world. He founded the charity Reach Out Worldwide and led teams of doctors and aid workers to places struck by natural disasters. In January 2010, he flew to Haiti after a massive earthquake left people homeless, without power, hungry and in need of medical attention. Ironically, he had surfed there a year earlier.

“The idea that people I’d gotten to know might have been hurt or killed brought the disaster a lot closer to home,” Walker told Merrill Lynch. His group built shelters and attended to the injured. Read the rest: Paul Walker Christian.