Joy Villa always turns heads at the Grammy’s, but in January observers wondered if she went too far, too political, when she sported a white gala dress hand-painted with an 8-month-old fetus surrounded by a rainbow womb with the words on her matching purse: “Choose Life.”

Villa — who among entertainers was a rare supporter of Trump with a “Make America Great Again” evening gown in the 2017 Grammys — shared that her motive to brazenly flout normative Hollywood politics was that she herself, pregnant at 20, alone and frightened, made the “most difficult and important decision of my life,” she wrote for Fox News. “I decided to carry my baby to term and then give her up for adoption to a loving family. I put her life over mine. It wasn’t easy. Every day was a struggle.”

Today Villa has an estimated net worth of $3 million. Her song (non-Christian) “I make the static” spiked charts at #1 after her MAGA/Trump publicity stunt. She lives comfortably in New York with her husband, Danish photographer Thorsten Overgaard.

But her life wasn’t always gold and glitter. 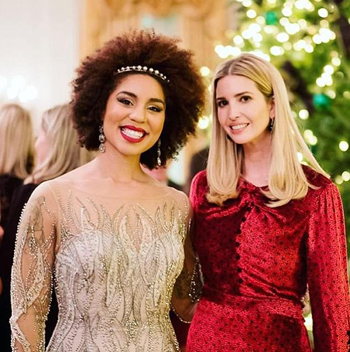 “I was penniless, far from home and trapped in an abusive, toxic relationship with a man who had become a shadow of what he once was,” Villa wrote. “At 19 I fell in love with an older man who was very kind hearted with a good heart, but once he began using drugs our relationship quickly became a nightmare. The same arms that once held and protected me were weaponized; night after night, I’d hide in a corner, terrified of being beaten.”

She worked in entertainment but hadn’t achieved success, so she found herself at the mercy of a merciless man. When the contraception failed, she found herself in a clinic with a nurse pressuring her to avail herself of the easy escape.

“She told me, ‘We can do it now, it’ll make it all go away. I’ve had several abortions, in fact all three of my daughters have had several. You are too young to have kids. This is the best choice for you,'” Villa shared. “I had never considered abortion, I wanted to stay and make things right with the father, to have a real family. (The nurse) had already made my choice for me.”

The pressure from a “medical professional” warped her mind.

“I couldn’t stop crying: I had a beautiful baby growing inside of me,” Villa recalled. “For many women, becoming pregnant is a dream come true, but I was overcome with guilt, agony and shame.”

But Villa gathered courage to defy the urgings of so many people. Read the rest of Joy Villa abortion.