She ran from abusive step dad, wound up with a pimp until a Christian family adopted her

Jadyn’s mom was a meth addict who died when she was in high school in 2010. She lived with her step-dad, who abused her.

A teacher found out and called Child Protective Services. Jadyn moved in with a friend of her mom’s family.

But when she came home late from school one day, the woman got upset and kicked her out.

Jadyn slept outside of her school for a few days. An acquaintance from school approached her: “If you need somewhere to stay, you can stay with me and my boyfriend,” according to a YouTube video by Exodus Road, a sex-trafficking ministry.

“Where else am I going to go?” she thought. It was a house with four or five other girls living there. 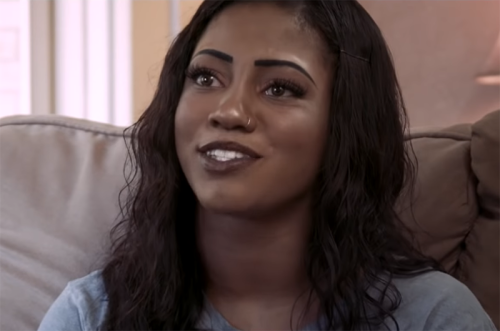 “This is my boyfriend, Joker,” the acquaintance introduced her. “He’s gonna take good care of you.”

Joker seemed very nice. He took Jadyn out to movies and to get her nails done. He bought her new clothes.

One day when she was sitting on the couch, Joker asked her, “We’re going to go out for a little bit. Do you want to go out with us?”

With another girl in the car, they pulled up to a motel. They went into a room, and the other girl started talking to a man about sexual things.

“I’m starting to catch on,” Jadyn recalls. “Things are starting to click in my mind. And I’m like, ‘That’s why you were so nice to me.’

The couple who eventually adopted Jadyn

Jadyn shrank with fear as she watched the other girl strip. Then they had sex.

“I’m looking at Joker, and he’s sitting there with a blank face as if it’s something normal,” she recalls.

“After everything’s finished, and he pays her, Joker sits down and tell me, ‘I’m not asking you to do what they do. But I’m asking you to sit in on every appointment that we go on. I don’t want you living here just for free. This will be you’re way of paying me back.’”

Thinking she had no alternative, Jadyn obediently sat and watched every “appointment” for the next three months.

“The first couple of times was really hard for me. But after a while it was just a thing we did,” she says. She even saw an 11-year-old girl taken advantage of. “When you don’t have anywhere else to go, you do what you have to do.”

An estimated one out of six runaways become child sex trafficking victims; 86% of them were under the care of Child Services or foster care when they ran away, according to Exodus Road. There are currently 57,700 victims of human trafficking in the U.S., ringing up $99 billion for the exploitation industry.

Of course, things got worse. At one “appointment,” the man in the room fixed his eyes on Jadyn.

“I’m not doing this,” Jadyn responded.

He pulled out a handgun and pointed it at her head.

“I’m sitting there crying on the floor,” Jadyn recalls. “He’s telling me I’m going to do this thing for him, and I’m like, ‘I guess I am.’”

Later at the car, Joker revealed his endgame. Everything was just preparation to influence her to become a sex slave too.

Joker told Jadyn, “I hope you didn’t expect to live here and not do anything for us.”

She was crying. Her mind was playing different scenarios and outcomes for her life. Girls told her that she would have to get drunk or high to perform the exploits that men demanded.

“So I’m going to be a drug addict just like my mother,” Jadyn surmised. “I love my mom. I really did. And I saw her struggles. And I saw the way men treated my mom, and I told myself that that wasn’t going to be me.

“But I didn’t have anywhere else to do,” she says with tears, remember the pain of the moment.

Joker went into his room while the girls talked about the trauma of the man who pulled a gun on Jadyn.

For a long time, Joker didn’t come out of his room. The long time got even longer — to the point that finally the girls decided to go in his room and see if he was ok.

“Basically, I’m pretty sure he overdosed. He was foaming at the mouth,” Jadyn says. “I’m thinking it’s fight or flight. I left. I slept on the streets again for a couple days.”

She roamed the streets always looking for a place to stay.

Eventually she found a friend who invited her to church.

“I go to church and I meet this family. We met twice,” Jadyn says. “They told me they were interested in adopting me. I had a lot of disbelief because of all the things I’d gone through.” Read the rest of the story of Christians helping resolve human trafficking.