In 2014, Adam Ford quit his day job to write satire news and The Babylon Bee, the “most trusted source of fake news,” was born two years later.

Stylistically similar to secular The Onion, The Babylon Bee, which clocks 9 million monthly views, has laughed its way through hallowed halls of mega churches and Congress.

Sometimes, its roasts resemble reality so closely that even Snopes has been duped into “fact-checking” its articles. Cue the endless eye-roll.

“Satire is a powerful, effective and Biblical tool for conveying ideas,” Ford wrote on Adam4D.com when he launched the Bee. Satire has “belong(ed) almost exclusively to the anti-religious view. The Bee aims to change that. Christ-centered news satire is now a thing.”

With the endless stream of negativity in your news feed, some laughter provides much needed stress release. 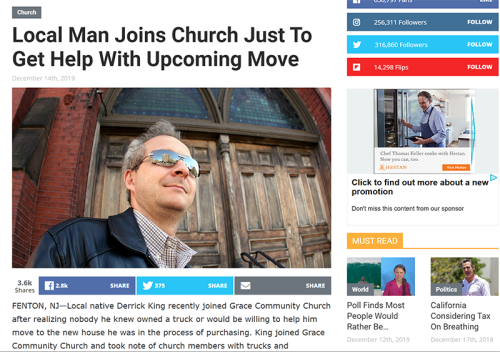 But The Babylon Bee (note the alliterative disharmony of the ancient Biblical capital city with the quirky newspaperish “Bee”) aims at more than just making fun of people. It shoots for reflection.

“It’s important to look at what we’re doing, to ‘examine ourselves.’ Satire acts like an overhead projector, taking something that people usually ignore and projecting it up on the wall for everyone to see,” Ford told Christianity Today. “It forces us to look at things we wouldn’t normally look at and makes us ask if we’re okay with them.”

It has ridiculed the ongoing impeachment against Trump: “Santa Claus Accused Of Quid Pro Quo For Giving Children Gifts In Exchange For Good Behavior.” It has lampooned Trump: “Donald Trump’s Ego Most Fragile Element In Known Universe, Scientists Confirm.”

It has poked fun at atheist physicist Stephen Hawking for postulating the multiverse (multiple universes) to by-step the insurmountable improbability of life spontaneously generating: “Atheist Accepts Multiverse Theory Of Every Possible Universe Except Biblical One.”

ome of the parodies are theological. Calvinists bear the brunt of the Bee’s beatings: “Calvinist Dog Corrects Owner: ‘No One Is A Good Boy’”

Even with few players, Lighthouse of Santa Monica wins

Lighthouse Christian Academy was missing three starters for Tuesday’s basketball game because the seniors went to Six Flags Magic Mountain for an unauthorized ditch day and were disqualified from league play.

Naturally, players were glum. Having won its first game, LCA didn’t expect — with only six players (half the roster) — to be able to muster much.

But Highland Hall also showed up with only six players, and so the Santa Monica Saints won 43-22 in the Northridge game.

At the first quarter, Lighthouse was sloppy. The score was 7-7. The Saints gave up easy turnovers.

In the second quarter, LCA picked up the pace and recovered its game somewhat, but still the score at half time was tight: 14-12. Read the rest: Santa Monica basketball private school.