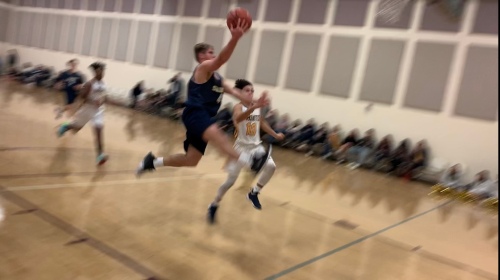 Coach poured coolant into the radiators at halftime.

Down 5-18, Lighthouse Christian Academy performed better in the second half, though not good enough to beat its amaranthine rival Hillcrest of Thousand Oaks in a foul fest of a basketball game on Friday.

“These guys have to learn to handle their frustrations with referees, with contact in these games,” said coach David Horowitz. “I’m trying to remind them that when you play with the power of God, you answer to that. You don’t have to get fired up about it.”

Senior Marcus Scribner was bringing competition to Hillcrest with speed and physicality. He was beating players and putting up shots. Others on the Lighthouse were missing and misunderstanding passes.

After the half time pep talk from coach, others calmed their nerves and began to score, including the ever-calm Pat Cannon, who uncharacteristically reacted a ref’s call in the first half, resulting in free throws for the opponents.

Senior Zachary Brewer found his rhythm, and Daniel O’Neil, the tallest player in the court, lurked into the key to receive passes and score. The Santa Monica Christian school hit 25 points in the second half.

But its defense leaked.

“We definitely played better in the second half. Our energy was better,” said Coach David. “But we didn’t have the defense we wanted to be able to shut (them) down. Our defense didn’t hone it down.

“We had no business being that ugly early. We’re just better than that,” he added. “We put ourselves in a hole, and you start playing the other team’s game and you give them confidence. We had the ability and the skill to not only compete with these guys but to overcome it. Read the rest: Gotta keep your cool to win basketball.