A Jewish millionaire lost it all, got Christ and thus found more than he ever had

Steve Olin, a Jewish boy from Brooklyn, made and lost millions, fell into drugs and was close to becoming homeless when he found the ultimate answer to set his life on course.

As a high school pitcher, he threw baseballs in the high 90 mph range. The New York Yankees wanted to sign him in 1962. His lifelong dream was within reach.

But his family, of modest means, insisted he go to college.

“The Yankees were impressed with me,” Olin says on an Israel Media Ministries video. “But my father and my family had never gone to college. My dad wouldn’t co-sign the contract because I was a minor. He said, ‘Son, I want you to get a college education, and then after college you can go into baseball.’

“I was heartbroken,” he says.

Still he honored his parents. He received a full scholarship at St. John’s University, where he is listed as Steve Olshansky on their ’65-66 roster. (Steve Olin who played for the Cleveland Indians is a different person.)

“I wanted to stay in New York,” he says. “God has a sense of humor that a Jewish boy went to a Catholic university.”

On the college baseball team, Olin injured his pitching arm.

“My team went on to the college world series without me. My arm was lame. I couldn’t pitch anymore. My fast balls had gone down to mediocre speed.”

Needless to say, he was crushed.

“God has different roads for us to go down,” he says, now looking back over his life. “He just didn’t have baseball as the road for me.”

Instead, Olin went into the business world.

At 31, he started his own electronics business. “I was fortunate to get the Atari video game line. Every door I went through, it was like God opened up for me. It was like magic. It was like going to Las Vegas and throwing sevens, one after another. I had millions of dollars in the bank, a penthouse in New York, a penthouse in Miami, a 15-acre weekend estate in Connecticut.”

In eight years, he did $2 billion in sales, and his public company was valued at $6 billion, he says. His wife and child lived the good life with him.

Out of the blue, panic attacks hit him. Read the rest of Jewish millionaire comes to Christ.

Albert Pujols thanks God for 3,000 hits

“Believe it or not, baseball is not the chief ambition of my life,” the 38-year-old heavy hitter says on his website. “Becoming a great baseball player is important to me, but it is not my primary focus. Because I know the Hall of Fame is not my ultimate final destination. My life’s goal is to bring glory to Jesus. My life is not mostly dedicated to the Lord, it is 100% committed to Jesus Christ and His will.”

Pujols (pronounced Poo-hols) grew up in the Dominican Republic. A child of divorce and the son of an alcoholic father, he was raised mostly by his grandmother and uncles. He was so poor that as a kid he used unripe limes for balls and milk cartons mitts to play baseball.

The American sport was an outlet — and an American opportunity.

After his grandmother and father immigrated with him to the U.S., Pujols played for Maple Woods Community College for one year. That’s when the St. Louis Cardinals picked him up. After one year in the minor league, Pujols was promoted to the majors in 2001.

Within four days of the season’s start, he recorded 3 RBIs and one home run. By season’s end, he was named Rookie of the Year and averaged .300 with 30 home runs, leading the Cardinals into the playoffs.

The 9-time All Star became one of baseball’s most feared sluggers known for guessing what pitch comes next.

After 11 seasons of consistently slamming balls to the fence for the Cardinals, he signed with the Los Angeles Angels in 2010 for a 10-year $210 million contract. Baseball buffs predicted the cash splash would bust. He was getting older and wouldn’t produce as he had in his younger years, they complained.

But they underestimated his “maniacal” dedication. He practiced obsessively and continued to whack the ball consistently.

“The one thing that is very understated about Albert is the sense of how hard he actually works at hitting, the studying of the pitchers, the actual time he spends in the cage,” former teammate David Eckstein tells the L.A. Times. “When the best player on your team is the hardest worker, it helps the club win.” 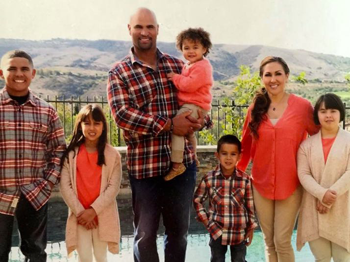 Pujols just became the 32nd major leaguer to reach 3,000 hits in MLB. He will rank with Hank Aaron, Willie Mays and Alex Rodriguez with those hits and 600 home runs. He’s also snagged two Gold Gloves and a Sports Illustrated Player of the Decade award.

If the U.S. gave Pujols fame, it also gave him something greater. In America, Pujols found Jesus, thanks to the love of his life Diedre, whom he met in 1998 and married two years later.

“I believed something was missing in my heart,” he says on a YouTube video. “In 1998 I decided to walk with Christ. I don’t just represent (a baseball club), I represent Christ. That’s the most important thing in my life. If you don’t know Christ… read the rest about Albert Pujols Christian 3000 hits.

Mike Matheny’s only prior coaching experience was a Little League team when the St. Louis Cardinals called on him to manage their Major League Baseball team.

It was quite a promotion, but Matheny, now 45, a believer who follows the leading of Christ daily, took it with stride and led the Cardinals to playoffs four consecutive seasons, a record for new time managers.

“I can either take credit like I had done something great to deserve this or I can be humbly bowing down on the floor to the Creator of all things and realizing that there is an opportunity,” Matheny told the Christian Post. “I do want to make sure that it is noted that I truly believe that we get opportunities and I believe that we have to do something with those… I just believe that God is at work around me all the time and I want to be in tune to that.”

Matheny was an outstanding MLB catcher. He won four Rawlings Golden Glove Awards. He established the catcher’s record for 252 consecutive games without committing an error. After 13 years of MLB playing, he retired in 2007 with post concussion syndrome.

In 2010 Matheny coached Little League baseball, and the following year, the Cardinals sought him to replace World Series winning coach Tony La Russa. The moved surprised baseball observers not only because of his lack of professional coaching experience but also because he was at the time the youngest MLB coach. The Cardinals picked him because of his ties to the organization (he played five seasons for the Cards) and because of his demonstrated leadership as a player.

Matheny didn’t disappoint. In 2012, he led the Cardinals to the National League playoffs and only got eliminated by the eventual World Series winners, the Giants. The next year, despite having to use 20 rookies at one point or another because of injuries, Matheny led the team to the World Series, which they lost to the Boston Red Sox.

Matheny is known for his attention to details, his work ethic and good relations with his players. He is vocal about his Christian faith but doesn’t try to shove it down his players throats or hold them to his own moral code. With an easy-going Christian testimony, he has 20 players coming to the pre-game prayer sessions. The Cards etch a cross on the mound at home games.

“My faith has been clear and open. Every year at spring training I explain to my guys I stand for certain things as a follower of Christ. But you’re never going to hear me preach this at you or hold you to any sort of moral obligations that I try to hold for myself,” he told the Christian Coalition. “That opens a door so when they ask me a question, they know the foundation of the majority of my answers. It opens some great opportunities.” Continue reading the article.