Ridiculed as a “fat slob” in the boxing world with 1-25 odds against, Andy Ruiz Jr. shocked the world when he defeated the heavyweight champion Anthony Joshua eight months ago.

On Saturday, the first Mexican-heritage heavyweight champion rematches in Saudi Arabia against the Nigerian-born British boxer who’s taller, more muscular and has a longer arm reach. (He lost the rematch.)

“God’s everything,” Ruiz said on a Seti Afoa video on YouTube. “I don’t think I would be here without Him, without His help. He’s always been in my life since I was a little kid. I’m a Christian, and I believe in God. I fight for God. On my fighting shorts, it says, ‘God is real.’ When I win, I’m going to give all the glory to God. If you believe in God, everything is possible.”

Andres Ponce Ruiz, now 30, grew up in the sparse desert town of Imperial, California, just 10 miles from the border of Mexico, where much of his family got swept away in the drug- and human-trafficking prevalent in the region.

A hyperactive kid who liked to get into trouble, Ruiz fell into street-fighting; even then he was always underestimated as a chubby kid. The streets learned that behind the baby face was a fast and furious succession of brutal blows that laid rivals flat.

“I was always hanging around with the wrong crowd and crew. There are a lot of gang members out there where I live. They’re all druggies. Some of my family members are gang or related to the gang,” Ruiz said in the UK’s Telegraph.

“I’ve been in many street fights. I fought street fights for my friends to protect them. My dad would go and look for me everywhere: alleys, houses and knocking at the doors to get me to go to the gym. I’d be hanging around with the wrong crowd. Thanks to boxing and my dad, I was steered in the right direction.” Read the rest of the article: Andy Ruiz Christian.

But in fact, the provocative pugilist – who will face Conor McGregor in the boxing ring Aug. 26th – is born-again. It’s not something he hides – or pedals.

“God is first in my life,” he declared unequivocally.

Mayweather was born in Grand Rapids, Michigan, with seven siblings sardined into one room. Both his mother and father struggled with drugs. His dad was a dealer and spent time in jail. There were heroine needles in his front yard and an aunt died of AIDS, infected by a dirty needle.

Dad was also a boxer and took Junior to the gym all the time. He didn’t take him anywhere else – not ice cream, the park or movies. Mayweather felt pretty much on his own, though his dad disputes this claim.

“I basically raised myself,” he said, according to Wikipedia. “My grandmother did what she could. When she got mad at me, I’d go to my mom’s house. My life was ups and downs.”

Boxing became Mayweather’s safe haven, a place where he could forget the sadness of his life and release his frustrations with aggression. He developed uncommon speed and a sixth sense of ring awareness that accelerated his rise in the boxing ranks.

He dropped out of high school and won 84 out of 88 amateur matches. Since going pro following a bronze medal in the 1996 Olympics, he hasn’t lost a fight and has surpassed the likes of Mohammad Ali and Mike Tyson as a five-division world champion.

His nickname as an amateur was “pretty boy.” He was so good defensively that opponents had trouble landing punches, leaving him scar less. But Mayweather dropped this moniker in favor of “money.” He posts videos of himself counting rolls of money and boasts unabashedly about his money.

“I got a 14-passenger jet. Got to give them another reason to hate, but I will motivate the people that are ambitious and want to be winners in life,” he wrote. “I’m materialistic, and I’m motivated by money. But God is first in my life.”

God was in his heart, but he reveled in the roll of the villain. He taunted opponents and glowered at them. He was convicted of beating his girlfriend. He strutted around with the pride of a peacock.

“Floyd Mayweather represents everything that’s wrong with sport and celebrity,” The Telegraph trumpeted in an article that lambasted him for 16 paragraphs, landing jab after jab. He “worshiped money and himself.” He’s misogynistic. He’s a boring fighter, spending more time avoiding than landing blows. His nickname “Money” sucks, and Australia wisely denied him a visa to visit the country, the article claimed.

His fight against Manny Pacquiao was “evil versus good.” Pacman (a much cooler nickname, the article asserted) was mom-loving and God-fearing, a rags-to-riches kid… Read the rest of the article Floyd Mayweather Christian.

From a very young age, Curtis “Earthquake” Kelley was designated as his father’s successor in Haitian voodoo, but after he visited hell on a drug overdose, he decided to turn to God.

Curtis’ great, great grandfather emigrated from Ireland to Haiti — then called Hispaniola. But slaves invoked witchcraft and his crops failed, so he moved to Texas with four slaves. From one of the slaves, he fathered Curtis’ grandfather, according to his testimony on YouTube.

His father moved to New York and had six children. When mom got pregnant with Curtis, dad tried to force her to abort. She was unwilling, so he kicked and beat her trying to provoke a miscarriage.

“God saw to it that He spared my life,” he said.

Curtis at age 4 watched his older brothers shoot up heroin and wanted to try. But his brothers wouldn’t let him, so he figured out how to “huff” on his own. At 6, he smoked marijuana. At 10, he snorted cocaine.

His family was steeped in voodoo. A priestess working for his father infiltrated church meetings and invited Christians to her own meetings offering potions and spells for jilted spouses, material wealth and love. Because Curtis was seventh-born in his house, he was a “chosen vessel.”

He lusted for power and money and began to learn paranormal techniques for casting night terror, but involvement in the occult opened him up to many torments. The priestess taught him not only witchcraft, but how to manipulate clients and keep them coming back with only partial relief.

“She took advantage of people,” Curtis said. “People believed that if God took too long, the occult would bring a quick fix. She would charge $20. That was a lot of money back then. I would watch husband after husband, boyfriend after boyfriend, come back.”

The priestess had a doll that conversed; a demon inside produced the poltergeist, he said.

“It told her what person was coming each night and what problem they had,” Curtis said. “Every time she would ‘prophe-lie’ — I call it ‘prophe-lie,’ not prophesy — the people would just throw money at her.”

She set up fetishes in his room, but that produced horrifying spectacles.

“I would see these demons coming through the floor and running around my room,” he said. “One day I was laying on my bed and felt it shaking. I turned on the light and looked underneath my bed and saw my dad. His skin tone was green and he was all scaly. He came out and smiled, and then he dived right through the floor. I got freaked out. I was so scared. I said, ‘What is this? I didn’t know all this was involved in this. What am I into?’ Read the rest of Curtis Earthquake Kelley.

George Foreman found God when he was dying 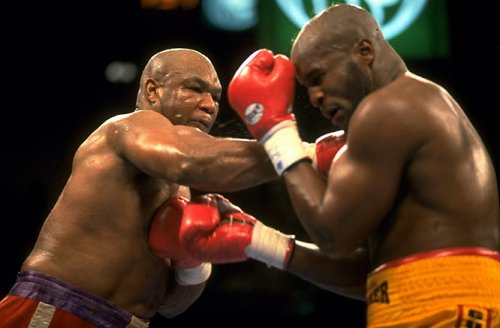 His powerful punch and menacing demeanor in the ring led George Foreman to Olympic Gold and heavyweight championships, but when Jimmy Young brutalized him in a humiliating defeat in 1977, the street bully from Houston felt he was dying.

“In the dressing room, I was walking back and forth to cool off,” he told The Houston Chronicle. “Then in a split second, I was fighting for my life.”

He lay on a locker room table. While friends and staff attended to his physical body, the battered brute battled with the God he learned little about as a kid.  He admitted later he only went to church for the free lunches.

“I kept thinking, ‘You believe in God. Why are you afraid to die?” Foreman told The New York Times. “But I really didn’t believe.”

Foreman began bargaining with his Creator. If God saved him, he would give his prize money to charity.

Foreman was bewildered and confused. He had never met anybody who didn’t want money. 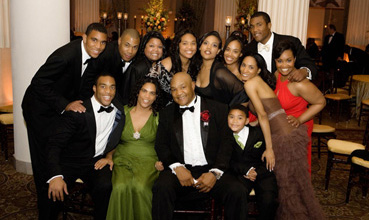 “It was the saddest, most horrible place I had ever seen,” he said. “Tears fell. I was scared. I’d never heard anyone turn down money. There I was fighting for my life with something that you couldn’t deal with. That changed my life forever.”

Then as his life ebbed away, too late to repent, Foreman felt a “giant hand” thrust him back into consciousness. He saw his friends. At the same time, he felt strangely filled with the presence of a dying Christ. He felt his forehead bleed and he imagined it pierced by Christ’s crown of thorns. He sensed his wrists punctured as if by the nails of the cross.

“I knew that Jesus Christ was coming alive in me,” Foreman told The Times. “I ran into the shower and turned on the water and — hallelujah! — I was born again. I kissed everybody in the dressing room and told them I loved them. That happened in March 1977, and I never have been the same again.”

A passion began to stir in his heart. “I started reciting the Bible, talking from the pit of my stomach in that dressing room. I was talking about how Jesus was God’s son and that he was alive. So when I came out of that, I asked a friend to go get me a Bible. And he said, ‘What kind?’ And I said, ‘I don’t know, one like your mother has.’ So, he went out and bought me a King James version of the Bible. And that’s how I got into religion.”

The turnaround in Foreman was immediate and dramatic. Today, he preaches punchy sermons as pastor at the Church of the Lord Jesus Christ in Houston.

Transformed from a rage-filled street punk into a humble and sweet Christian, Foreman found he couldn’t muster the will to fight anymore, so he dropped boxing for 10 years. Read the rest of the George Foreman story.