When Drew Brees tore his ACL, he felt his very life was torn from him. He was only a junior in high school, at a time when he wanted to attract the attention of recruiters.

“I’ve seen friends get that injury, and they would never come back quite the same,” Drew told Sports Spectrum. “What I thought was going to be my life, I felt like it was being stripped away from me.”

On his 17th birthday, Brees wallowed in self-pity and mounting depression as he sat in church. He listened to the pastor for once instead of goofing off with his brother. The preacher said God was looking for a few good men to carry on His kingdom. For the first time ever, the sermon struck a chord in his heart.

“It was at this moment that I accepted Jesus Christ into my heart,” Drew recounted. “I knew that there was something bigger planned for me than just playing sports.”

Of course, Drew did make it in football. He played college ball at Purdue University and was picked by the San Diego Chargers in 2001.

In 2005, Brees was enjoying a relatively successful season when Broncos tackle Gerard Warren hit him on the ground recovering his own fumble. The late hit caused a shoulder dislocation on his throwing arm.

“I had never dislocated anything in my life, but I knew exactly what happened,” Drew recalls. “I knew that besides a broken neck, this was the absolute worst injury I could ever ask for” as a quarterback.

I’m probably never going to put on a Chargers uniform again, Drew thought grimly as he walked off the field. I’ll probably never play football ever again in any uniform.

However, Drew had a remarkable recovery of the torn labrum and the New Orleans Saints expressed interest in hiring him. He signed in 2006.

In 2009, he led the Saints to their first Super Bowl win. He earned the moniker “Cool Brees” for his presence of mind under pressure. He has continued to play for New Orleans.

Drew married his college sweetheart Brittany Dudchenko in 2003. The couple has four children together: three sons and one daughter.

Just this year, the well-loved quarterback found himself maligned after he encouraged kids to participate in Bring your Bible to School Day in conjunction with “Focus on the Family.”

Leftist Louisiana-based Big Easy Magazine accused Focus on the Family of being anti-LGBT and supporting “conversion therapy.” Because LGBT are often bullied, they said Drew was joining “haters” and undercutting his lifelong campaign against bullying. Read the rest: Drew Brees Christian.

The Ravens quarterback is not out to win. He’s out to destroy his opponents, to bury them under so many points, both passed and rushed. His mindset is insanely competitive.

He’s been compared to Mike Vick, but he passes more, and he’s been hailed as a prototype revolutionizing football for future generations of QBs, who ought to be both athletic like a running back and precise passers. The 22-year-old, who outgunned both Tom Brady and Russell Wilson in double digits this season, is charging madly into the NFL’s MVP.

On top of all that, Lamar Jackson is a Christian, who credited his faith when he won the Heisman Trophy as a sophomore in 2016 at the University of Louisville.

“First and foremost, before I go further along in my speech, I want to thank my Lord and Savior, Jesus Christ,” Lamar said. “Without Him, none of us would be here right now.”

Lamar Jackson lost his dad in an automobile accident when he was eight. From then on, his single mother raised Lamar and his siblings in poverty in Pompano Beach, Florida. He credits Mom with doing her best to fill the role of Mom and Dad.

And the role of football coach.

Felicia Jones was a passionate athlete herself and pushed her son into football. Even at eight, he outran and outpassed all the other kids in Pop Warner football. Felicia watched intently from the sidelines and then took little Lamar home to give him more drills, either ones she saw or ones she made up. She even tackled him roughly so that he would intensify his game to beat bigger people.

“People don’t believe me,” Jackson said on ESPN. “She was an athlete. She used to play basketball. She saw what we were able to do, and she’d go back there and play football with us. She was just making us tougher because she’s older, so she’s bringing power that we’re not used to feeling. We didn’t take it like anything different.”

In addition to intense workouts, she drilled Lamar with a code of moral principles called The Super 8: God, prayer, faith, family, education, sacrifice, character and discipline.

By the time Lamar got to college he was a football machine, chewing up opponents and spitting them out. In his opening game during his sophomore year, he established the school record scoring eight touchdowns, all in the first half. He went on to become the youngest ever recipient of the Heisman trophy at age 19.

But when it came time for the NFL draft in 2018, 28 teams overlooked him in their picks. He was the last pick of the first round.

But the snub only inspired him. Lamar and his mom, who acted as his agent, remembered and repeated Matt. 20:16: “The last will be first, and the first last,” according to CBS Sports. He wasn’t a first in NFL draft; he came in last. Now on the football field, he determined to finish first. Read the rest Lamar Jackson Christian

When the collegiate national championship game is played Monday, the two quarterbacks competing against each other on the gridiron will both be Christians.

Trevor Lawrence at Clemson and Tua Tagovailoa at Alabama are outspoken believers who put their faith before football. 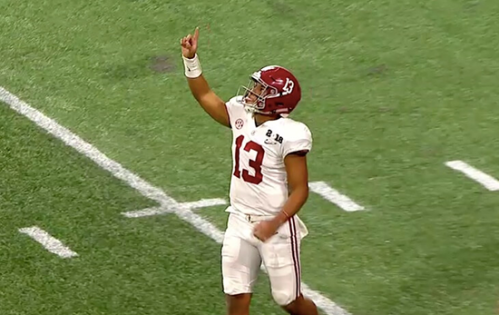 Tua, whose full Somoan name is Tuanigamanuolepola, made Hawaiian waves (he’s from Hawaii, so of course…) when he posted a picture of himself with eye black painted in the form of the cross under his eyes against Tennessee University.

“Jesus pride!!! Go Tua…and all others who stand for Christ,” one person commented on Facebook. “I appreciate the fact that he isn’t at all shy about his faith. Way to go Tua!”

Tua selected the Crimson Tide of Alabama University despite intense competition for the quarterback position because Christianity is a big part of the locker room. The previous year, Jalen Hurts won the SEC offensive player of the year as the Crimson QB.

“A lot of people are rooted in the Word over here just like back home,” Tagovailoa noted on BamaInsider. “The Southern hospitality is almost the same as the love and the kindness that they show back at home.

“You have to go places to compete, so why not come to the best place?” he added. “You want to play with the best, I guess. That’s kind of my thing. Anywhere you go, you’re going to have to compete.”

Tua was given a chance to play during some blowout games during his freshman season. But in the championship game when Hurts was losing at the first half, Tua was given the nod to lead his team to a comeback 26-23 victory against Georgia last season. Read the rest of the story of Tua Christian

Clemson’s QB is Christian. So is ‘Bama’s. 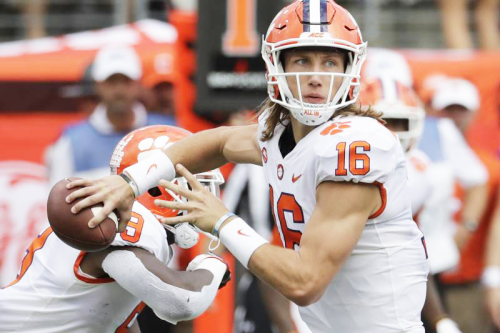 Clemson freshman sensation quarterback Trevor Lawrence made clear that he doesn’t care as much about football as he does about Jesus.

“Eerily similar” to Deshaun Watson, Lawrence made heads turn as he threw for 2,933 total yards, 27 touchdowns and four interceptions with a 65.5 completion percentage, leading his team to the national championship game on Jan. 7th.

“Football is important to me, obviously, but it’s not my life; it’s not like the biggest thing in my life, I would say my faith is,” the 6’5” 215-pound precision passer said in a postgame interview. “That just comes from knowing who I am outside of (football). No matter how big the situation is, it’s not going to define me. I put my identity in what Christ says and who He thinks I am and who He says I am. 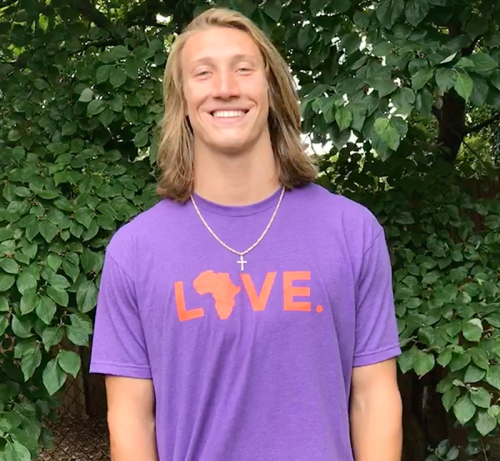 “So really, at the end of the day, it doesn’t really matter what people think about me or how good they think I play or whatever.”

Clemson University is happy to have the calm, cool and collected QB marshaling their missiles.

“When he first got here, you could always tell. He just had a presence about him. His talent, it’s fun to watch.” says senior offensive tackle Mitch Hyatt on The State website. “I always sensed it in practice.” Read he rest of Trevor Lawrence Christian.