Ten days ago*, Deny — the retired bomb-locating German shepherd from US military service in Kuwait — was put to rest after a meal of Texas brisket and rib sausage. (*longer now. date was from original publication)

“This was not supposed to be a cry fest,” says the Texas lawyer who adopted the unadoptable, aggressive dog in a video that was supposed to be private but went viral.

“It was supposed to be a private moment of closure for me and my dog, but I recorded it for Mission K9,” the Texas service that places retired service dogs in loving homes, Thomas Locke told God Reports. “They put it on Tiktok and it just blew up.

Ever since Thomas, 59, who himself served in the military, adopted Deny on Christmas of 2018, a special bond was formed. 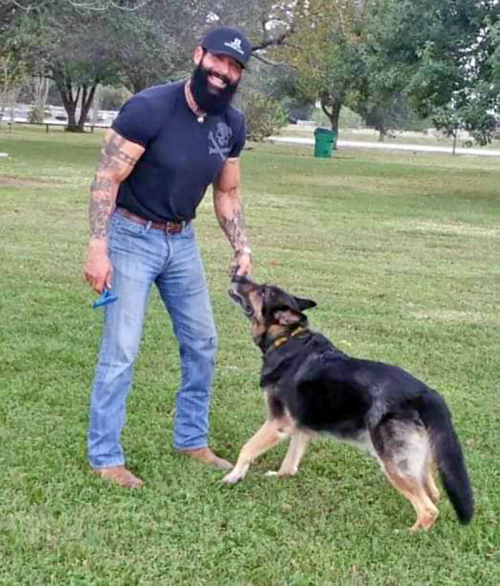 “These dogs have unconditional love,” Thomas says. “They don’t care if you’re white black, Christian, not a Christian, Muslim, they don’t care. All they want is love. They don’t judge. How beautiful is that?”

Deny was going to be a challenge. After working 12 hours a day, seven days a week sniffing out explosives for eight years of service in Kuwait, the Dutch-born and -trained dog had developed PTSD and was categorized by the overseas veteran as “unadoptable.”

Other parents looking to bring home dogs had passed over Deny at the 21-acre ranch at Magnolia, Texas, where Mission K9 saves work and service dogs from euthanasia. But when Thomas saw the 90-pound animal, his heart was moved and he took the dog to his home to Pearland, south of Houston.

“Deny had a hip problem. He was a medical nightmare,” Thomas says. “So people kept passing on him. But when I passed him, his profile was majestic. He was very regal looking. The sun was starting to go down. And when I saw him I realized he was the dog I wanted to get.”

The worries were over his hostility, but Deny’s first problem arose when he tried to pee on the Christmas tree to mark his territory.

After that, the aggressiveness melted away into those sad brown eyes and huggable muzzle. Deny followed Thomas everywhere he went. He watched him incessantly. Thomas even slept with the dog many nights on the floor. Deny understood only Dutch commands from his trainers in Holland, so Thomas had to learn Dutch.

“My wife was very understanding,” he says. “She knew a special relationship had formed. When you adopt a dog — especially a working dog — they never take their eyes off of you. Whenever I left the house, he was right there when I came home looking at the door where I left. We had entire conversations without saying a word.”

Thomas’s dad was a Vietnam vet and his mom was an alcoholic and drug addict, so he was sent off to Church of Christ-run foster homes where he had to go to church and watch preachers on the television.

“It was very comforting for me to have that stability and that moral compass. I knew there was something bigger than me out there,” Thomas says. “My testimony is a country music song.”

Ironically, Thomas worked with explosives in the military from 1978 to 1981 but saw no combat. When he got out, he found “there wasn’t much need for my skills” in the American job market and took up construction. He married Elizabeth Garcia and had a son, who today is a police officer in Seabrook, Texas.

After he got injured on the job site, he became an RN and then a lawyer, initially a prosecutor and then a defense attorney in private practice.

Whenever he was home, Deny was always nuzzling at his ankle, until recently when they installed a Jacuzzi. When Thomas realized his dog was not right behind him he looked over. Deny, whose spine was fractured from military service, was breaking down with old age.

“He was literally dragging his 90 pound body trying to follow me, never crying,” Thomas says. “I looked around and saw and just dropped to the ground. I can’t tell you how much I just loved this dog. There was a bond. I just can’t explain it.”

Deny’s back legs didn’t work, nor did his bladder. Thomas realized that the workload was bearing down on poor Deny and that it would be best to release him into Heaven. He called the vet and prepared Deny’s last meal, which he filmed originally only with the intent to encourage people to adopt dogs from Mission K9. The video went viral and a nation’s tears almost caused regional flooding. Read the rest: Deny, the military dog, put to rest after retirement in Christian home.