Art out of food

Jessie Bearden plays with her food.

I was always taught not to play with my food. Maybe that’s why I never became the artist I aspired to be as a child.

Actually I was discouraged from being an artist because I was told you can’t make any money at it.

But I rebelled and became a wordsmith, an artist with words.

God tells us to be like Him; He created. As much a I admire art around the world, none compares to the daily painting God spreads on his canvass of a sunset. None equals the beauty of a flower. Consider the lilies of the field…even Solomon in all his glory was not arrayed like one of these — Matt. 6:28-29.

I’m going to be a fan of Jessie Bearden, who create surprising portraits out of food. And I’m going to keep writing.

But I can’t wait to get to Heaven to see the wonders of God’s art there. I admire His beauty everywhere here on Earth.

I bet the artists continue doing their art in Heaven.

Holdout helper | Why she didn’t go on medical missions for so long, and why she’ll be on more

Andrea at far left, took to the clinic like a duck to water

For 22 times, her boss and mom pressed Andrea Campos to go on a Lighthouse Medical Mission – and she always declined.

“I just didn’t have a passion for Africa,” the Santa Monica native said.

After almost two decades of them wheedling her, Andrea, 37, finally relented. She is now in Guatemala, translating and writing prescriptions on 10-hour shifts with no breaks and only a half hour lunch.

But, if she was the holdout in a family of big LMM volunteers, this week she has plunged into the labor-intensive clinic with a vengeance.

Some volunteers are awkward, squeamish around blood, befuddled by Latin jargon, duty-dodgers who wanted the applause, not real work. Not Andrea. She’s totally in her element, holding her own like a pro.

“This is definitely NOT my last mission,” Andrea said. “You just see the hope in their eyes of getting better. I’m seeing people with their eyes fill up with tears.”

On its third day of clinic in Guatemala, Lighthouse Medical Missions attended to 125 patients in Villa Nueva, a small municipality on the outskirts of Guatemala City. Today is expected to be the busiest day.

Andrea has worked as a receptionist on and off since 1998 for Dr. Bob Hamilton, a Santa Monica pediatrician who will pleasantly pester patients and friends to help the medical missions he founded and leads.

Not only has Andrea put her medical familiarity to good use in Guatemala, she’s also taken over much of the administration. She’s re-organizing hotel and food for the volunteers with her keen business acumen. From age six, she’s been money-shrewd when she lived in Puerto Vallarta and charged school mates to use her eraser because it was “from America.” Read more about participating in Christian medical missions.

Then all of a sudden, they look like a winning team

A stand-up-and-take-notice-goal. Kelly O’Hara beats her defender to the inside and karate kicks a cross into the net. Wow!

The US Women’s National Team has slogged through its world cup, scraping out scrappy victories. Their play was lackluster. They looked toothless particularly on attack.

Then whamo! Out of nowhere, they send Germany home with a command performance. Yesterday the women of red, white and blue picked their opponents’ pockets. Yes there were two bad ref calls that favored the U.S., but they were by far the superior team. 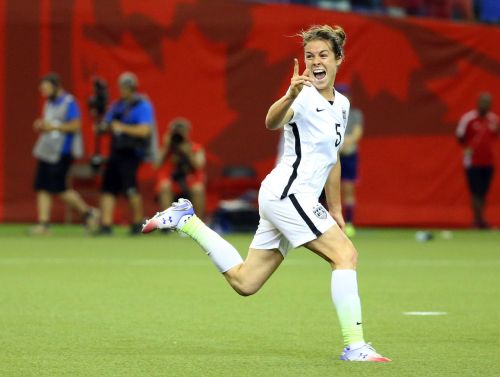 The Star from Stanford. Kelly O’Hara celebrates the goal that iced the victory.

Pundits credit a formation change-up from a 4-4-2 to a 4-3-3. But also each player was nearly perfect. Gone were the individual blunders of prior games.

The semi final victory sends the USWNT closer to championship.

They had been improving game after game. And when they needed it most against their toughest opponent, they conjured mastery of the game. They won 2-0.

This is a key to life: Keep improving. Keep working to do better. Keep eliminating errors.