Neo Nazi wooed out of hate by black Christian lady

An African American drove Michael Kent into a neo Nazi hate group, and another one pulled him out.

Michael’s sojourn into racism began when he was 12 years old and struck up a budding friendship with a black boy in Erie, PA.

“I got me a black friend. No animosity or nothing. We were as thick as thieves. We got along great,” Michael recalls. One day he was invited to his house.

“I don’t want that blue-eyed devil in my house,” his mother declared.

His friend was never allowed to talk to him after that. “My first encounter with racism was that day,” he says.

“It was over,” Michael recalls. “You guys don’t like accepting me no matter what. I was discriminated against, and it was like, ‘Why?’”

By the time he was 15, he started cooking up methamphetamines and getting involved with neo Nazis, even working closely with the higher-ups. He began passing out hate pamphlets and participating in marches on the state capitol.

Later, when he had a child himself, he understood why other parents had tried to protect their kids.

“These people I freaking hurt and I destroyed their lives, they were just trying to protect their kid,” he says. “I cried like a little baby the day my son was born because I know that if anybody hurt my kid, I’d kill them. That’s when I knew I had to walk away.”

What really helped him get out of the neo Nazis was a female African American probation officer, who visited his house in Pinal County, Arizona, unaccompanied. Because of his violent involvement with the skinheads, all of his previous probation officers — white officers — took pains to show up with a wingman.

“Not even people of my own race showed up at my house alone,” Michael says. “I gained a lot of respect for her that day.”

Tiffany Whittier’s job was to check for parole violations after his release in 2006 for drugs and weapons charges.

But Tiffany, a committed Christian, went beyond the call of duty and reached out to Michael with some heart-to-heart life coaching. She urged him to tear down the Hitler paraphernalia decorating his walls. He complied with everything, worked his job and paid his fines. He got swastika tattoos covered up.

Inside, his heart was melted by the kindness of Tiffany.

“Why did you believe in me?” he asked her. (“I Am Second Conversations” adds a twist to the usual testimonial videos of a person seated in a white chair. In these, two people talk face to face in two white chairs.)

“Why did you want to help me to change? You put forth more of an effort than anybody I’ve had in my life. Why? Not even people of my own race wanted to help me.” Read the rest: Neo Nazi renounces hate thanks to black Christian 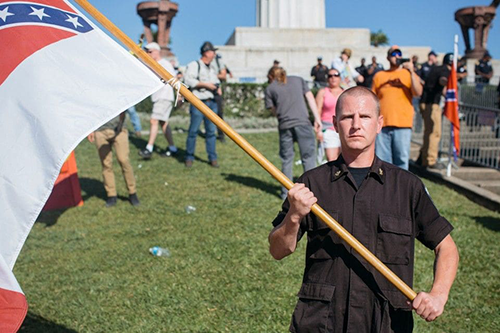 A year ago, Ken Parker marched with the Neo-Nazis in Charlottesville, putting feet to his affinity with the white nationalist movement. Since then, he’s gotten saved, repented of racism, gotten baptized and attends an almost all black church in Jacksonville, Florida.

“When we make it to Heaven, Heaven’s not just gonna be one race. There’s gonna be all kinds of races up there,” says Pastor William McKinnon III of the All Saints Holiness Church where Ken and his fiancé attend.

Ken started riling up racial hatred when he got out of the Navy and couldn’t land a job. He found a scapegoat in minorities.

First he joined the KKK and ascended up the ranks to become the Grand Dragon Master. But the white-hooded men who burned crosses weren’t racist enough for Ken. So somewhere in his six years out of the Navy, he joined the Neo-Nazis.

The Charlottesville, Virginia, protest was supposedly to save historical monuments but it quickly flared into violent clashes that left one person dead.

“It was thinly veiled to save our monuments, to save our heritage,” Ken told NBC news. “But we knew when we went in there that it was gonna turn into a racially heated situation, and it wasn’t going to work out good for either side.”

Ken spilled his virulent hate with proclamations of “white power.” He hated Jews and gays too.

But he started having misgivings when interviewed by a filmmaker documenting the white nationalist movements. Those doubts culminated in a 180-degree reversal when his neighbor, a black pastor, invited him to a barbecue. After chatting with people at the end of the pool party, Pastor William invited Ken and his fiancé to church.

Ken thought it was worth a try.

When he showed up he found that he, his fiancé, and another church member were the only three white people in the 70-person congregation. As he listened to the worship music and the sermon, he found his heart softening.

That morning he accepted Jesus as his Savior and Lord and was born again — completing the transition from racist to redeemed!

Ken gave his testimony one day before the congregation.

“I said I was a grand dragon of the KKK, and then the Klan wasn’t hateful enough for me, so I decided to become a Nazi — and a lot of them, their jaws about hit the floor and their eyes got real big,” Ken remembers. “But after the service, not a single one of them had anything negative to say. They’re all coming up and hugging me and shaking my hand, you know, building me up instead of tearing me down.” Finish the story Neo Nazi saved in black church.