Before there was Corona, there was crisis in Venezuela on border of Colombia 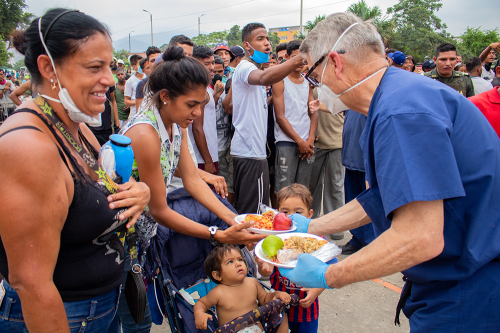 Some of them walked 10 days to cross the border into Colombia in search of food or medical supplies they could take back to socialism-starved Venezuela.

Johnny Huerta and a team of six doctors, eight nurses and 24 other volunteers were in Cucuta, Colombia, on a temporary medical and feeding mission to show the love of Christ in a tangible way.

The pleas for prayers grew to a fevered pitch after some miraculous healings and exorcisms, Johnny says.

The Lighthouse Medical Mission, which got its start 25 years ago in war-torn West Africa, landed on the border of Venezuela on March 7th — before most of the U.S. got locked down over Coronavirus fears. The humanitarian crisis of 40,000 daily border crossings there has been essentially eclipsed.

The Santa Monica-based team provided medical attention and drugs and handed out 3,000 meals a day in conjunction with World Central Kitchen in three areas: in Cucuta, in a Yukpa village on the outskirts of town and in nearby Pamplona. The 39 people divided up in teams to minister in each area.

Johnny was assigned logistics, took pictures, but mostly got roped into translation. The stories he heard of dead family members and left-behind family members appalled him as well as the squalor he witnessed. In the Yukpa village, there were no bathrooms and people lived in huts fashioned with tree limbs and plastic tarp.

“People can live with little and still be happy, but this was not healthy,” Johnny says. “They bathe in an unsanitary river, and that’s why they get lots of infections. They also drink out of that river.

“They have makeshift huts built out of garbage. Babies are walking around naked. They pretty much have nothing. It was one of those shocking situations where you say, ‘Wow people are waking up and living like this every day with unhealthy conditions.’”

The team brought two chefs, but they were prevented from serving until they scrambled to obtain Columbia food preparation licenses.

When they arrived at the border on the first day, “we weren’t sure how they were going to respond as we got out of the van to serve the food,” Johnny says. “They were desperate for food and outnumbered us. Immediately they ran over and we tried to get them in a line, which eventually became a crowd.

“As we tried to transport apples from the back of the van to the food serving area they began to crowd the back of the van as well. We ended up handing out the apples from the van as we were never gonna get through. The next couple of times we fed at the border we organized police protection in advance and were a bit more organized. Even then it was still a bit chaotic.”

Short-term missions are highly recommended because they can impact American church-goers forever: they broaden horizons, impart vision and erode entitlement.

“I was just thankful they gave me the privilege of being able to go with me,” Johnny says. “You feel like you get more out than you put into it. I’m more mature in my faith and in my life than I was before.”

As busy as he was being pulled this way and that, Johnny still found time to share his passion for painting with the kids. It was a personal connection he’ll treasure for life.

In Pamplona, the team attended 3,000 patients.

Many people are losing their eyesight because of rampant infections, Johnny says.

While the doctors saw patients, the pastors and lay leaders were praying for people, many of whom got healed even before they received medical attention, Johnny says.

That’s when they started getting swarmed.

Because witchcraft is widely practiced in the region, several people were delivered from demonic spirits, Johnny says.

“One lady was released from demon possession. She looked super oppressed beforehand and was all smiles afterward,” Johnny says. “They practice witchcraft and spiritism because of their circumstances. They’re reaching out for help. But when we came to them with the gospel, they were open.” Read the rest: Venezuelan refugees Christian response

He astounded with his viral video to calm crying infants. Now Dr. Bob Hamilton has a book 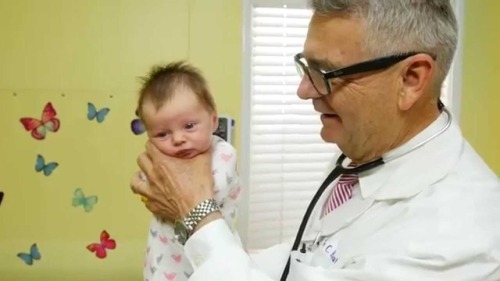 Bob Hamilton was still a college student in the throes of getting a medical degree and becoming a doctor when his young wife delivered shocking news.

“How did this happen?” he wondered almost out loud. “What are we going to do now?”

A line of well-meaning friends and fellow students began to lecture them: having a child at such a young age, while in medical school, while scrimping finances, would “destroy us both, along with any career plans,” he remembers. They spoke “with great authority.”

“What we discovered was quite the opposite,” says Dr. Bob in his new book 7 Secrets of the Newborn: Secrets and (Happy) Surprises of the First Year. 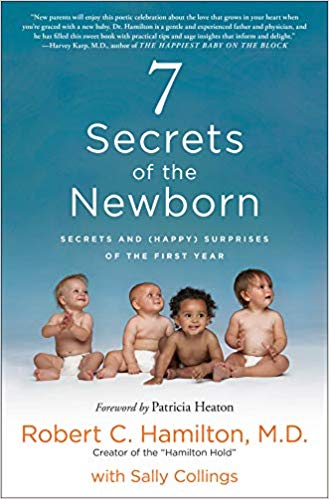 The stated goal of the book is to reassure overly-worried newlyweds that parenting is still possible in the perfection-obsessed 2010s and that having children is delightful. It might as well have been a how-to guide as he delves into the nitty-gritty details of changing diapers, scheduling sleep and coping with colic.

Robert Hamilton is a Christian pediatrician in Santa Monica who has led medical teams into Africa and Latin America for 20 years. His viral video “The Hold” — showing how to stop an infant’s crying by wrapping his arms and holding him at 45 degrees — created a sensation and put him on the world’s radar. Currently clocking 37 million views, the 4-minute video earned him the moniker “The Baby Whisperer.”

The book spends considerable time describing the wonder and beauty of babies in scientific detail. With elegant prose, it evokes images as if it were a documentary inside and outside of the womb. It leaves the reader with a sensation of awe and wonder.

The book also includes fascinating scientific discoveries in the form of excerpted nuggets scattered throughout that are worth a read by themselves. Hamilton could have aimed at the abortion debate directly, but he wisely avoids polemics. Read the rest of  7 Secrets of the Newborn: Secrets and (Happy) Surprises of the First Year.