Hadiyah-Nicole Green lost her adoptive parents to cancer, so she threw herself into the study of physics to cope with her loss.

Hadiyah was born St. Louis, Missouri. She was orphaned at a very young age and raised by her aunt Oralee Smith and her uncle General Lee Smith, according to an NBC article.

She was always a strong student, studying at Alabama A&M University. After changing her major three times, she eventually decided on a degree in physics. She was the first in her family to obtain a bachelor’s degree. 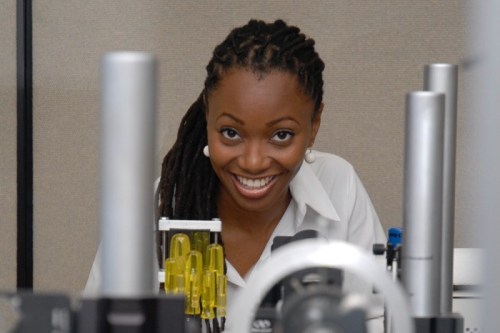 It was at this moment of elation and euphoria, when everybody was celebrating her academic success, that her aunt announced that she had cervical/ovarian cancer.

Hadiyah was crushed. Her aunt was essentially her mother. What good was the college degree if she couldn’t harvest the benefits and enjoy them with her close family?

But the prognosis was even more grim: she had already lived with the cancer for eight years but refused treatment. Her aunt rejected treatments because of the painful side effects of chemotherapy and radiation.

“I didn’t understand it at first,” Hadiyah said.

Hadiyah took care of her for three months. Then Auntie died in 2005.

It was a huge blow.

Not too long afterward, her uncle was diagnosed with cancer as well. The difference was that her uncle received the treatment — and to confirm his wife’s concerns — the treatment was a horrible experience.

“He really had it bad. The treatment disfigured him,” Hadiyah said. “The man that raised me wasn’t the same. He just wasn’t the same person.” Read the rest about Hadiyah-Nicole Green Christian researcher fighting cancer.