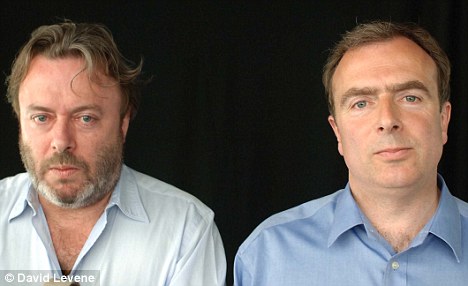 To inaugurate his atheism, 15-year-old Peter Hitchens burned his Bible outside his Cambridge boarding school in 1967 in front of a group of curious and enthusiastic fellow students.

The desecration turned out to be anti-climatic. The Bible didn’t catch fire in the hoped-for dramatic fashion. As a matter of fact, the thick stack of paper pages were poor kindling and the wind put it out. Only with much coaxing and much patience did it partially burn. His friends, eager to gawk at the anti-God defiance, lost interest and drifted away.

Today, Peter Hitchens, has come full circle. After enlisting with Troskty communists and championing atheist causes, he is now back to Christianity. His older brother Christopher, a media darling and atheistic provocateur with a best-seller God is Not Great, never came back to faith.

The brothers faced-off in a 2008 debate in Grand Rapids over the existence of God. Peter had answered his brother’s jeers against God with his own book, The Rage Against God. The spirited debate was watched keenly: It was more than a clash between two Titans of undisputed intellect from polar extremes; it was two fiercely feuding brothers.

Christopher died in December 2011 from esophageal cancer, a condition provoked and exacerbated by hard drinking. At 64, younger brother Peter maintains good health, still cycling on public roadways at some risk to life and limb.

Peter’s journey back to God started after the young English gentleman, born of a British Naval officer, became a full-fledged activist from the left who clashed with police and got arrested for breaking into a fallout shelter.

By his own admission, Peter was a foul-mouthed juvenile delinquent who mocked his elders and anyone perceived to be weak. He raged against police and experimented amply with drugs. He was a card-carrying member of the Trotskyist International Socialists from 1969 to ’75.

“I have passed through the same atheist revelation that most self-confident British members of my generation — I was born in 1951 – have experienced,” he says. “We were sure that we, and our civilization, had grown out of the nursery myths of God, angels and Heaven. We had modern medicine, penicillin, jet engines, the welfare state, the United Nations and ‘science,’ which explained everything that needed to be explained.” Read the rest: atheist testimonies.

*Note: I don’t own the images’ rights, and I’m not making any money on them.

*Second Note: This is the second time I publish Peter Hitchens’ testimony. The prior version was a reprint from the UK Daily Mail. This one was written by my journalism student at the Santa Monica Christian high school Lighthouse Christian Academy.