A pastor who’s a politician? Rob McCoy flouted Calvary Chapel. Then he defied the governor of California

For 20 years, Rob McCoy preached in his pulpit and never faced persecution, but when he ventured into politics, he got death threats, received hate mail and was stalked by menacing figures.

“I got beat up,” says McCoy, former mayor of Thousand Oaks in California. “It was the hardest thing I ever did.”

A pastor who’s a politician???

“I want to dispel the myth that Christians don’t belong in politics,” says McCoy, 55, who is at the center of a national maelstrom by holding services in violation of California’s rules closing churches. 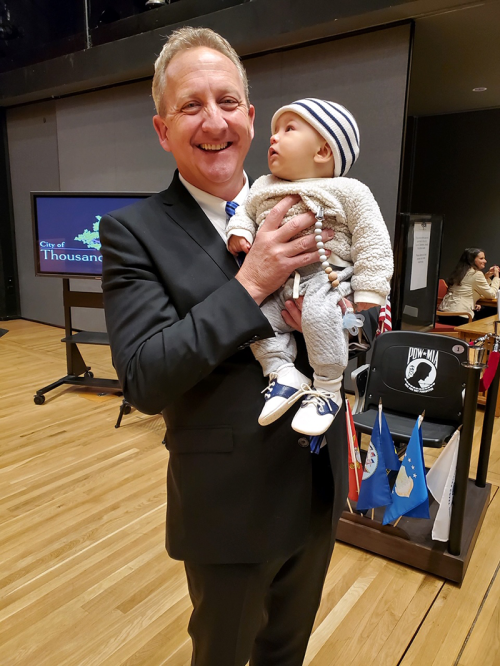 “You don’t have the right to shut down churches and let Marxists run amok in our cities,” McCoy said in the Citizens Journal.

McCoy was referring to recent massive protests and riots of Black Lives Matter and Antifa where vandalism and looting were widespread and hundreds of thousands of bodies huddled together on the street with basically no social distancing nor face masks mandated to stop the spread of Covid. The same liberal politicians who encourage the protests and made no mention of the dangers of Covid are the ones closing churches in California, New York, Chicago and Minnesota.

If protesters aren’t required to stay home due to Covid, why are church members? The current slew of governing leaders have deemed church “non-essential,” while marijuana dispensaries, liquor stores and the like are doing a thriving business.

The U.S. Supreme Court just handed down July 24th a discouraging 5-4 ruling for Nevada churches that have been facing suffocating restrictions while casinos are relatively free to return to business.

“The Constitution guarantees the free exercise of religion,” wrote Justice Samuel Alito in the dissenting opinion. “It says nothing about the freedom to play craps or blackjack, to feed tokens into a slot machine or to engage in any other game of chance. A public health emergency does not give governors and other public officials carte blanche to disregard the Constitution for as long as the medical problem persists.”

The son of a Navy captain, Rob McCoy grew up in Coronado, California, doing all things associated with water: swimming, surfing, scuba and water polo.

An English teacher in public high school invited him to a home Bible study, where he heard about Jesus for the first time, but it was a swim coach who led him to the Lord.

On a swim scholarship, McCoy attended California State University at Fresno where he got a bachelor’s degree in history in 1987. It was during college that he and his roommate co-committed to following Christ more diligently.

He was engaged to someone else when he met his wife. Because his girlfriend got pregnant, his college group pastor suggested they expedite marriage. This brought a crisis with his parents because the girl was Hispanic.

“You give birth to that child, and I’ll kick you out of this house,” his father told him.

Kicked out and trying to pick up the pieces of his life, McCoy went to a Christian concert with his fiancé at Hume Lake.

On the way back from the concert, something shocking happened. His fiancé took off the engagement ring and confessed she’d slept with the campus pastor, a married man. McCoy waited until birth to do a paternity test, which confirmed it was the pastor’s child.

All throughout McCoy’s ups and downs “in the midst my sin and God’s grace,” Mederies (she goes by Michelle) Fowler remained a friend to him and encouraged him to do the right thing, McCoy says. After the engagement was officially called off, he grew closer to Michelle and the two eventually married. 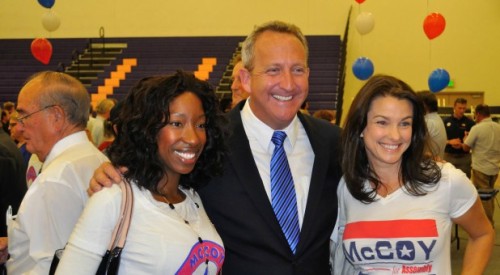 In an unusual coincidence, Michelle’s grandmother — also married to a Navy man, Admiral Richard Fowler — had hosted the baby shower and donated the crib towards little Rob McCoy years earlier. His parents were pleased with Michelle.

Today, McCoy calls these high and lows his higher education in the “school of hard knocks.” The couple has four natural born children — Molly, Kelly, Daniel and Michael — and one adopted daughter, Natasha.

Nowadays, McCoy is a a conservative Republican opposed to abortion, but when he was in high school and his then-girlfriend warned him she’d missed her period, he urged abortion as the quick and easy means to elude responsibility.

As the days passed, however, it turned out his girlfriend wasn’t pregnant after all. When McCoy was married in 1990 to Michelle, his wife miscarried and he wept over the dead baby. (The miscarriage almost killed his wife due to hemorrhaging, he adds.)

The loss of his first child provided a time for for reflection.

What’s the difference between the child that you wanted to get rid of and the one now that you are weeping over? God impressed on his heart.

“The difference was convenience,” McCoy surmises grimly. “I didn’t want to get beat up by her dad. The child was just a commodity. It was all about me.”

By contrast, the miscarried child filled his heart with love. “It was at that moment that I loved somebody more than myself. I came face to face with ‘What is responsibility? What is life?’” he says. “I was just empty and cold until I came to Christ.”

If once he treasured only himself, McCoy now values people. He’s always hosted people in his house, missionaries, refugees and even the wayward sons of well-known U.S. congressmen. All receive the love of Christ and the chance for discipleship. Right now, he’s hosting Colombians.

During college he got to know and admired the Calvary Chapel movement, so he joined the Redlands church where Don McClure was pastor. Eventually he followed McClure to San Jose to help with the work there and was ordained. In 2001, he was offered the pastorate the Thousand Oaks Calvary Chapel, one the oldest but was declining in numbers, he says. Today they have 1,400 in attendance.

He was riding on a wave or revival. Calvary Chapel was founded by Chuck Smith in 1968 on a simple principle: teach the whole Word to young people disaffected by the turbulence of the 1960s – and be led by the Spirit.

“Chuck decided to be apolitical because all these kids were disillusioned with politics, and began teaching the Bible. The nation was in turmoil with all these kids checked out of the church and had gone after Eastern religions and gone after every kind of drug imaginable,” McCoy said at Liberty.

“It was an amazing move of God upon the state of California. But we were apolitical.”

In fact, staying out of politics was practically a major tenet of their doctrine.

So how, then, did McCoy break with his church’s doctrine and “sully” himself in “dirty politics.”

Two things happened. One was a couple of key people encouraged him to impact society through politics because of his grip on history. They were on a trip to Israel.

The second was the deterioration of conditions in California. “With 10,000% growth in Calvary Chapels and being apolitical, what was the result?” he asked.

The gospel is supposed to transform culture. How have we impacted the State of California being apolitical? he wondered.

California had slipped from 5th largest GDP to 6th or 7th. It aborted more babies than there are people in Canada. It led the drive for no-fault divorce that decimated homes in America. It was a leader in anti-family values and in poverty levels, in taxes and in debt, he says.

McCoy launched his foray into politics with an unsuccessful bid for the California assembly. The state’s Republican party poured $1 million into his opponent’s campaign in the primary because they didn’t want an old white man, McCoy says. He still won.

The Republicans endorsed him but only on the condition he let an outsider wunderkind run his campaign. The guy was a brilliant kid from UC Berkeley but wasn’t saved. No matter. Within days, McCoy’s supporters had evangelized him and turned him into a believer.

He almost won the seat, but the Democrats flooded the obscure assembly seat with $6 million in funding, and he lost by 4,000 votes.

It was a bruising defeat. He discovered politics is dirty and his opponents were vicious. He had worked tirelessly and had suffered threats, hate mail and intimidation tactics. “I never suffered the kind of persecution the Bible talks about until I went into politics,” he says.

He was exhausted. But then somebody suggested he run for the seat on the Thousand Oaks City council that his opponent vacated to run against him for Assembly. He reluctantly relented. After 150 coffees and 650 volunteers canvassing neighborhoods, he won by a mere 52 votes, he says.

It was McCoy who helped stop the Assembly bill that would have outlawed “conversion therapy” for minors that many feared would slash the throat of the church’s use of the Bible. McCoy simply invited the bill’s sponsor, California Assemblyman Evan Low, to visit his church and meet his diverse staff and listen to their concerns that the bill violated the First Amendment. Read the rest: Christians in politics, Rob McCoy defied Governor’s closure of churches.