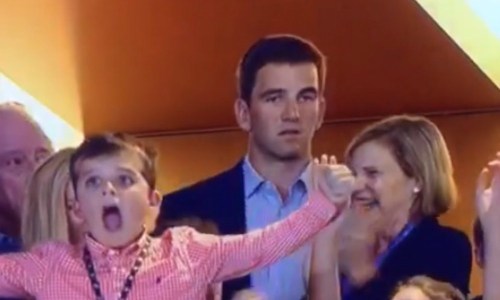 As Peyton Manning was winning his second Super Bowl, the cameras panned his family. A grim-faced Eli Manning, who quarterbacks for the New York Giants, just got his record (two Super Bowls) equaled. The media speculated wildly: He was mad that his brother and rival tied him. He was no longer the favored child. Etc. and nauseating etc.

It turns out the wild imaginations were all projecting their own evil thoughts on poor Eli. Yes, he had a grim face, but not because he had a rivalry with his brother. He was thinking, he came forward to clear up the record, about strategy. What would the Broncos do next to guarantee the win? Deep in playroom cogitations, he didn’t show on his face the rejoicing of the rest of the family.

No, you’re not “hearing” the Holy Spirit guessing what a brother or sister is thinking. If you suspect evil in his heart, maybe it’s your own evil. Maybe, if YOU had that face it would be because of some bad thoughts. But maybe the other person not so.

Pentecostal Christians make a mess of church ministry by confusing psychological projection with Holy Spirit thinking. Don’t pay attention to the face. Just preach the word and love people. Don’t judge them based on their face.

When Carolina Panthers Quarterback Cam Newton walked away unscathed from a horrible accident that rolled his truck in December 2014, he gave praise, honor and glory to God.

Newton, arguably the NFL’s greatest player of 2015-16 and a Super Bowl contender, is on top of the world. Passing for 400 yards in his debut game in 2012, he bested Peyton Manning’s passing record of 280 yards in Manning’s first regular season game. This year, the Panthers are 15-1. His dual threat capabilities crushed the Arizona Cardinals 49-15 in the NFC finals. 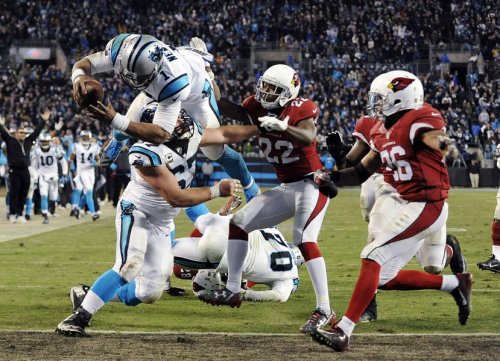 But while his professional trajectory seemed to sail through the air on heaven’s wings, things in his personal life have not always gone so well. He was hounded by an NCAA investigation for receiving payment to enroll at college, and he was accused of stealing a laptop at Auburn University. As a pro, he met and began to live with ex-stripper Kia Proctor.

Newton had grown up with God. His father, Cecil Newton, is a bishop overseeing five Pentecostal churches in Georgia.

But perhaps the intoxicating power of riding on top of the world caused him to momentarily forget the humility and fear of God necessary for a true relationship with the Creator. Then the accident left him shaken, reminding him about his need for God. 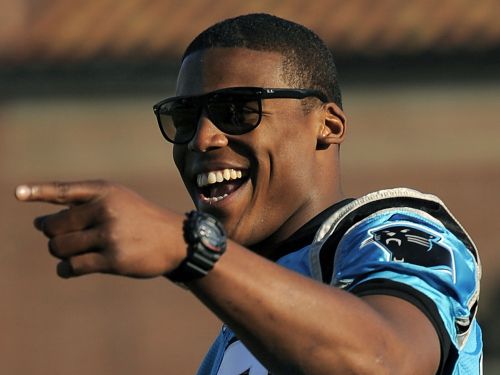 On that fateful day, he was negotiating a confusing intersection in Charlotte when another car slammed into the rear side of his black pickup truck and sent it rolling. He clambered out the back cabin window, and paramedics took him to the hospital where doctors treated him for minor fractures in his lower back.

He only missed one game as a result of the accident.

At 6’5” and 245 pounds of muscle, Newton is currently the most feared quarterback in the National Football League. Most QBs either specialize in throwing or running, but Newton excels in both, which is why the Panthers made the NFC’s best defense, the Cardinals, look like their fine-feathered namesakes — birds.

When they face the Denver Broncos in Super Bowl 50 on Feb. 7, they will again be facing a team with a stalwart defense – not to mention legendary Quarterback Peyton Manning.

Newton will be up to his old antics. He performs a celebratory dance for every touchdown — ostentation that football purists frown upon. He also runs the touchdown football over to the fans and hands it to a little kid — a gesture that is hard for anyone to frown upon. His broad, ubiquitous smile shows he enjoys the game.

Newton hopes his gridiron prowess will do for the Panthers, who have never won a Super Bowl, what it did for the University of Auburn. At Auburn, he became the third player in major college football history to both rush and pass for 20 or more touchdowns in a single season. His outstanding performance earned him the Heisman Trophy, and he led Auburn to their second national championship in 2011.

Read the full article here. It was written by my son, Robert, with a little help from his dad.