Quarterback Tom Brady says it wasn’t under-inflated balls that helped the New England Patriots clinch the AFC Championship. It was the team chaplain. The 4-time Super Bowl winner is telling people that Jack Easterby, 31, gets a lion’s share of the credit for the Patriot’s season, which culminated with a final win against the Seattle Seahawks on Sunday. “He’s just a great person and friend,” Brady told ESPN. “You feel a special connection with him and with his genuine caring for all the people in his life.” 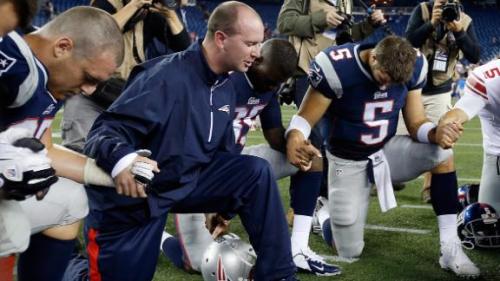 While some team chaplains may feel neglected by their organization, Easterby is on the Patriot payroll with an office near Coach Bill Belichick. He’s an exceptionally upbeat former college basketball player who connects with professional athletes. His website, “The Greatest Champion,” encourages viewers to accept the greatest champion of all — Jesus Christ — who hung on the cross and resurrected from the dead. Safety Devin McCourty called Easterby “a godsend to this team” who has “helped create better men,” ESPN reported. Read the rest of my Christian sports article.