She taught my dad, now me, in Independent Study Program at Los Angeles Christian school

Mrs. Payton has been a teacher at the Lighthouse for 27 years. In fact the first class she ever taught was my dad’s 4th grade class.

I’m a second generation Payton pupil, and she still looks as young as she did in my dad’s day.

Mrs. Payton has been the teacher for the “Pace” Program at our Santa Monica Christian high school for 4 years. Through booklets, this Independent Studies Program allows students to finish their school work “at their own pace.”

They progressively work their way through the course material on an individual basis. They are not expected to keep up with the teacher (or be held back by the teacher). It’s not only good for at risk students; it helps geniuses to get through faster than a plodding class.

The booklets give explanatory material and then asks questions to check for reading comprehension. At the end, the student takes a test. It’s been good for a lot of kids who don’t flourish in a traditional setting.

“Mrs.Payton lets us have fun while she makes sure that we get our work done,” freshman Josie Bowen said.

Mrs.Payton not only teaches Pace but she also mentors many of us students.

Most people think of camping as something they would never want to experience: Sleeping on the dank ground, eating only unsavory camp food, days without showering and nothing to do. But going on a trip at Lighthouse Christian Academy will change that.

I came to the Lighthouse when I was in seventh grade. They also offer the rafting trip to the students who attend our gradeschool counterpart the Lighthouse Church School, but it wasn’t until my freshman year that I decided to go on the rafting trip. What shocked me was the lack of people that wanted to go. With the urging of Mrs. Lisa Clancy, I decided to go and had a great time.

Now during my sophomore year, the trip rolled around and no one seemed like they wanted to go. Granted some people had other engagements but the group of people that went was small.

Even though the group was small, it was a fun time. The drive to the campsite seemed short because you bonded with the people in the car — or slept. When we arrived at the campsite, all of us from the Santa Monica Christian school were all taken aback by the breathtaking nature around us.

The campsite that the school goes to every year was better than any campsite I had been to before. There was indoor plumbing, a pool, and a small shop if you wanted to buy snacks. This made the camping part of the trip so much easier.

The rafting part of the trip was both frightening and entertaining. We rafted one of the more harder rivers, and though some people had a better time than others, the scared feeling before you rafted is worth it. There is an adrenaline rush you feel when you’re riding a literal water roller coaster. Read the rest of the rafting trip story.

The greatest joy of teaching is NOT seeing heads full of knowledge but hearts full of Jesus. Of course, we do (try to) cram in a lot of studies into these youthful brains. We do (try to) prepare them for 4-year institutions. But sending them off to make millions and lose their soul is NOT what we are about.

Lighthouse Christian Academy has been my plowing terrain for six years, and another school year has concluded. Since I got off the mission field, it has been my mission field in America. We give the kids Bible and love. It turns out a lot of studies need love, and a lot of students want the Bible.

I taught U.S. Literature and A.P. Spanish this semester (and journalism). The kids learned about unforgiveness through The Scarlet Letter, Moby Dick and A Cask of Amontillado. They learned about transcendentalism, realism, modernism and post-modernism. They really got the chance to see if they want hopelessness to be their life compass.

And journalism? That’s always a favorite for me, though I think I put more effort into it than the students. Oh well.

A toast to all my fellow teachers out there. 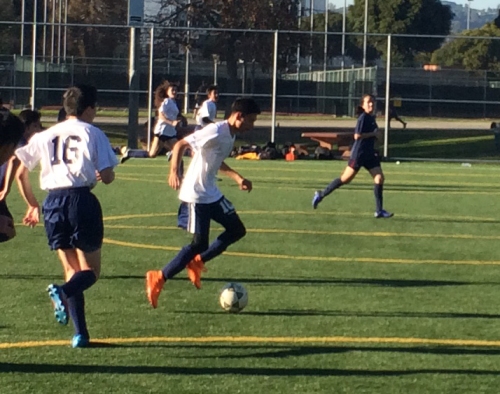 Lighthouse returned to its winning ways Tuesday with a 4-0 shutout of Pilgrim School.

There is something romantic, something poetic about slugging it out in a losing battle — if you don’t succumb to cynicism. Parents cheer on their players, who bravely mount a futile fight. Coaches teach the sport to beginners. You are playing competitive league, learning about teamwork, effort and excellence. It’s a game, so even if you lose, it’s better than doing homework. The odds are just overwhelmingly against you.

It is a poetry that Lighthouse Christian Academy, with historically low enrollments, knows well — on the football field, on the volleyball court and on the soccer field.

But on Tuesday, the romance of being the underdog didn’t belong Lighthouse. It belonged to Pilgrim, which staged an epic fight and skirmished rousingly but ultimately buckled before bigger guns.

The Saints saw themselves, for once, in the dominant role.

The Santa Monica Christian school’s team was powerful enough to compete against last year’s league champions, Newbury Park. On Jan. 19, they Saints shocked the big kids on the block, upending their hegemony with a quite unexpected 2-1 from tireless toiling, vision and belief.

Then with the rush of the mouse that roared, the Saints played against Einstein Academy Friday and saw their dynamism, their teamwork and their unbeaten record evaporate. It’s not far from the truth to say that Einstein crushed the overconfident Saints.

Tuesday was a chance to turnaround. To finish the article, click here.

Energy won out over technical ability

The Saints wore down last year’s league champs with some pitbullish defending and electric running.

Newbury Park showed technical superiority and greater speed for the first 20 minutes but could not break the deadlock bolt on the Lighthouse Christian Academy defense for high school soccer. Sophomore goalie Justin Berry leaped like Superman to deny some power shots.

“We had no answer for your energy,” the opposing coach admitted. LCA came from behind to win 2-1.

One defensive lapse before the half resulted in the Gator goal, a powerful shot from just outside the box from an unmarked player. Aside from that momentary lowering of the guard, the Santa Monica Christian school worked hard to keep their opponents marked and ground down their superior rivals with sheer exercise of willpower.

Senior Jelove Mira muscled and challenged every defender and every ball to reduce Berry‘s workload.

The Saints had reason to be encouraged, down only one goal at the half. Coach Jack Mefford reminded his team that last year Newbury came from behind to win the game and urged players to get revenge.

It was the five-shot energy drink freshman Levi Photenhauer who latched onto a ball on the right side of the field in the box to cross it in front of the Gator goalie, tying the scoreline at 1-1.

Though undermanned with no substitutes, the Saints breathed a second wind and chased balls, hassled opponents, bodied and pushed the limits of permissive aggression to frustrate the Gators. Junior Erhan Meric wrecked havoc and created danger running tirelessly all over the field. Read the rest of Christian school Los Angeles story. 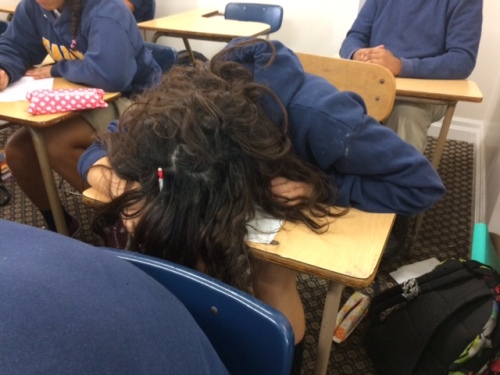 Learning the rules of conjugating verbs is hard enough — let alone all the exceptions of irregulars. It’s like juggling balls — keeping them all in the air — to be able to remember and apply them all immediately as needed. 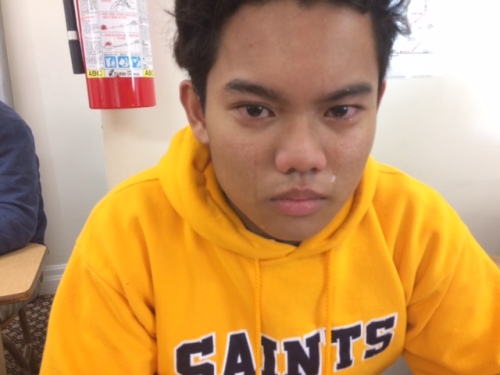 My Spanish 2 students just completed the imperfect tense, which is the perfect time to sum up and see if they remember the other conjugations: present, preterit and command forms.

The highest grade was a 69%, from my son, a native-born Guatemalan. (We were missionaries.) Not a passing grade at Lighthouse Christian Academy in Santa Monica, where only a C is considered passing. 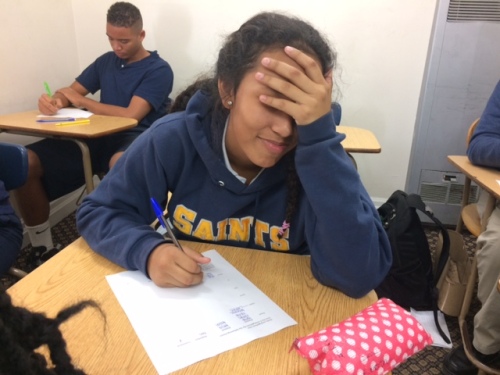 Conjugations belong to the branch of linguistics known as morphology, how words are formed. The dizzying array of conjugations in Spanish (there are 302 variations for each verb) frustrates native English speakers since the changes on the verb in English are few and simple. The poor student asks: Why?

Despite marketing (by Pimsleur and others) alleging that reciting and rewriting lists is useless, I still assert that the old style of learning is the best way to mastery. After all, it worked for me. I didn’t just “catch” Spanish by immersing myself in Mexico; I studied before and during my time of immersion at the University of Guadalajara (sí soy chivo, soy tapatío).

What do you think about conjugations? Can you post a more miserable, conjugation-learning face in the comments?

The tiniest guy on the football field just became the target (Yes, that’s my son)

He’s been called Mighty Mouse, a bulldog, a pinball and a Rubik’s Cube (he’s about as tall as he’s wide). Teachers and students have mistaken him for a sixth grader.

Lighthouse Christian Academy‘s freshman center, Hosea Ashcraft, became its predominant running back Friday against Cornerstone Christian of Wildomar. He had 20 carries for about 70 yards and one touchdown in the 12-58 loss to the Crusaders.

LCA’s fearsome football program has been reduced to this: its core is four freshman, its quarterback is a scrawny sophomore, its lone senior is an artist who really doesn’t want to play but goes to games just to help the guys field an 8-man football team with nine players.

Successive lean enrollments in recent years have shrunk the quarry from which they cut their tough stuff. So they resorted to the 5’1″ pre-pubescent fresh meat, Hosea. 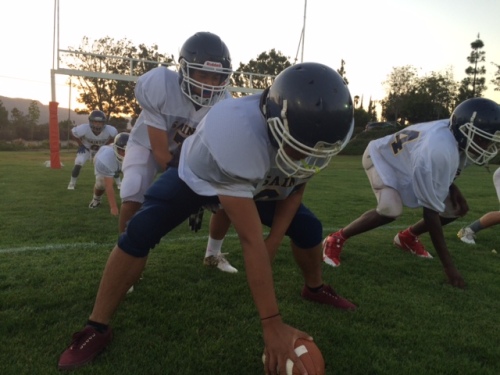 “Defensively, we were terrible,” said Coach Zach Scribner. “We’re not doing what we told the kids to do in terms of making their reads. Everybody’s looking around trying to figure out where the ball is instead of making the read and reacting off the read.”

Indeed, the Crusaders overran LCA’s defense like Fort Apache. By the second quarter, they had racked up 38 points. They may have even stepped off the gas pedal in anticipation of an easy shutout when the Santa Monica Saints surprised them.

LCA players made some key blocks — something coaches are working intensely to improve with the team of football neophytes. The Saints drove upfield, and Hosea crashed through to the end zone to give the electrons on the visitor’s side of the scoreboard some work.

“Hosea keeps his feet running. He has a low center of balance,” observed Lighthouse Pastor Josh Scribner, himself an accomplished football player. Read the rest of the article about Santa Monica Christian school football.

I get energy off this guy 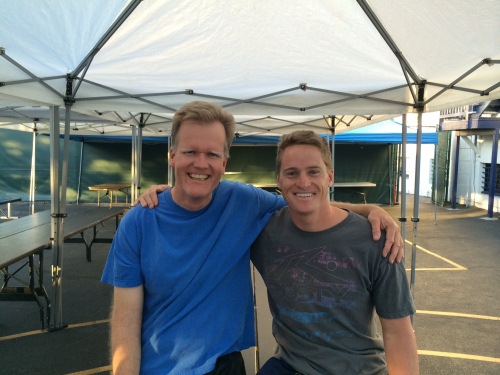 Zach Scribner works odd jobs to be able to teach at our Christian high school, which is small and resource-stretched. He prefers to save souls. He cleans the church (for free, I think). I help him occasionally. He inspires me.

I get energy off this guy. While others in the church emanate cynicism, you can never get a negative thought out of this guy. I want to be like him.

Is it a funny thing that a somewhat old guy (me — I’m 48) looks up to and wants to emulate a young guy (he was a little boy when I was a pastor-missionary)? Yeah, I have a lot to learn in my Christian life, and I can learn it from him. It doesn’t matter that he’s a million years younger than me.

I can thank God to have him as one of my best friends. I thank God for people who inspire.