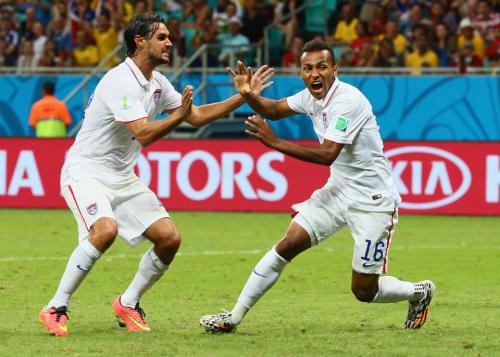 Julian Green’s sensational strike sparked a rally that had people believing. (I don’t own the rights to this image, and I’m not making any money on it.)

Don’t go glum over the U.S. elimination from World Cup. The run was the impossible dream. Just to make it out of the group stage showed prowess.

Amid the tears, there is one glimmer of hope. That was a 19-year-old kid who only played a few minutes of World Cup soccer and scored a sensational neck-stretcher wild-sideways-kick goal that sparked an emotional U.S. rally in their 2-1 loss to Belgium.

A resident of Germany since age 2, Julian Green only recently defined his desire to serve the red, white and blue. He was recruited also by Germany.

U.S. Goalie Tim Howard made scintillating save after save to keep the U.S. in the game. (I don’t own the rights to this photo, and I’m not making any money on it.)

U.S. Coach Jurgen Klinsmann was wise to sacrifice Landon Donovan for Julian Green. Recognizing that USA’s chances were unrealistic in 2014, Klinsmann’s taking the long-term approach to build U.S. soccer. Build, don’t burn, your program. Come back stronger. Make a squad with a realistic chance at winning a World Cup. Until now, our only flourish was a 2nd-place finish in the Confederations Cup in 2009. 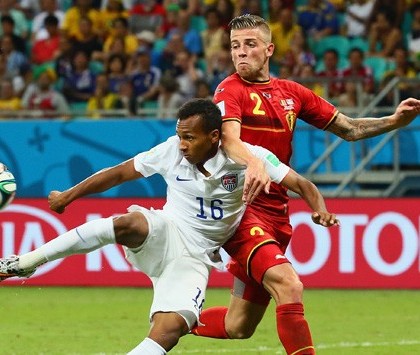 An astonishing over-the-shoulder one-touch fires home to spark U.S. hopes. (I don’t own the rights to this image, and I’m not making any money on it.)

If you are church leader, it matters little how badly you’re getting beaten (by lack of finances, by apathy, by attacks on your health). The only thing that matters is how you marshal your resources to build God’s kingdom. If this doesn’t appear to be the year of revival, maybe next year.

The impossible dream is not over. It’s just extended.