Both the priest and the Levite could see the man wallowing in his own blood. But they were too important or too busy to be bothered. No doubt, they were doing work for the Holy One. So they didn’t have time to do the work the Holy One dropped in front of them.

The good guys were bad and the bad guy was good. Along came a halfbreed Samaritan. No respectable Jew would associate with the Samaritans, whose blood was contaminated irremediably with gentile DNA. They weren’t children of God, the chosen people.

But the Samaritan did what God wanted. He administered first aid and brought the wounded man to the Inn, where he paid for his care during recovery.

It is not enough to see the need around the world. To complain about godlessness, paganism and hedonism does nothing. You must act, showing the love of Jesus in real – not imaginary – ways.

Even in the second watch of the night

As a sandanista, Alex had a super strict commander. Good thing too, because other platoons woke up to find two-thirds their throats slit. The contras in the Nicaraguan civil war of the 1980s took advantage of any platoon with sleeping guards. They slipped in, put one hand over the sleeper’s mouth and with the other cut his throat. It was a noiseless death that allowed them to move to the next and the next, killing 100s, and slink out before dawn. Because Alex’s commander maintained strict discipline, his platoon never fell victim. They were vigilant.

And if he shall come in the second watch, or come in the third watch, and find them so, blessed are those servants. — Luke 12:38 NIV.

As a Christian, I feel like I’ve dropped my guard, eased off the gas pedal — now in the second watch of my life. I’m 47.

On my first watch, as pastor in Guatemala, I was diligent in prayer and the word. Forced to return to the United States four years ago, I don’t get much “playing time.” Consequently, I’ve toned down the regimen. And I feel bad.

We go through different seasons in life. In my “first watch,” the souls of Guatemala took priority. Now in my “second watch,” my kids get it. God is doing wonderful things in their lives. Can I keep following hard after the Lord?

If you want to fly, you have to try

You have to believe you’ll fly if you’re going to leap out into the open space at height.

Those who hope in the LORD will renew their strength. They will soar on wings like eagles.  — Isaiah 40:31 NIV.

Only the brave meet success. For fear of falling (failing), some become chickens, turkeys and penguins.

Don’t be ground-bound. Try to fly.

Put your failures behind you

Chilean Mauricio Pinilla commemorated his World Cup failure — a late strike that would have defeated Brazil had it not bounced off the bar — with a tattoo on his back titled: “One centimeter from glory.”

Why would he immortalize a painful memory? It’s on his back.

As Christians, we must be forward-looking (I don’t think Pinilla is Christian). We must put our failures behind us and strive for better things in the future.

After the storm, freshness 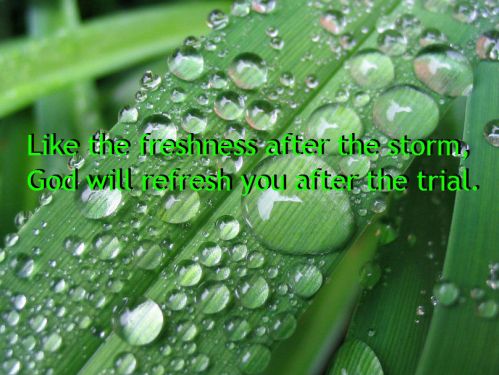 Prayer: a distinctive of a Christian

Maybe Samson wasn’t muscle-bound at all. To the contrary, the Bible states that it was the power God that came upon him and enabled him to perform Herculean feats. But after Samson violated the last remaining distinctive (having his hair cut off), God’s Spirit left him and he became a wimp.

What distinguishes you as a Christian and sets you apart from a person who doesn’t know God? I hope prayer does.

Most of the “signs” of a believer in the Bible are inwardly, not outwardly. (Even circumcision was a a

Not muscles, but the power of God enabled Samson. You can access that same power.

very private sign!) The believer knew it and no one else. Carrying a Bible and wearing a Sunday hat don’t make you a Christian.

Only you know how much you are praying. Jesus prayed. His disciples prayed. They have left us this legacy. A significant portion of our day is to be dedicated to prayer. I shoot for at least an hour. A friend of mine gets three. (Praise God for her!)