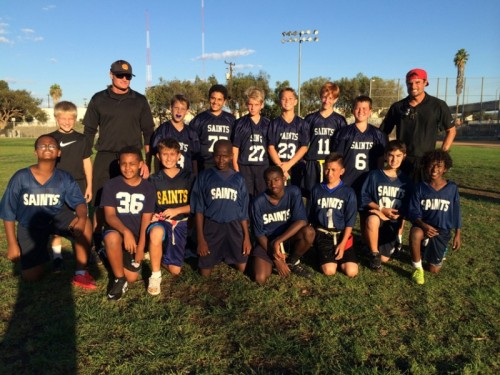 The boys from the Lighthouse Church School in Santa Monica

Gregory Heffley, the anti-heroic protagonist of Diary of a Wimpy Kid, thought middle school should be divided by height and weight instead of academic ability to avoid bullying.

His observations have been pointedly spot-on for Lighthouse Church School flag football this season. Drawing on a miniature school population of 60, they have stitched together a team to face towering muscle-bound opponents.

So the Lilliputians from Lighthouse took on another set of Gullivers and lost Tuesday 20-26 against Turning Point School at McManus Park.

“We had a great game. We stopped them on defense,” said LCS Coach Nate Scribner. “We lost by one touchdown, and that touchdown was my fault. They scored on an interception that was my fault. We made better blocks today. We have sixth graders playing against all these older guys.”

Lighthouse is just this year re-starting its flag football program. With inexperienced players jumbled together, it’s been difficult to get everyone doing their job proficiently. Sometimes kids run the wrong play. Blocking has been a downfall.

But through the patient work of the coaches, the team has slowly improved. In a game against Westside Neighborhood School on Sept. 29, the Saints strung together their first progression of plays leading to a touchdown.

Then on Oct. 6 against Crossroads B, they won.

Before half time, the Saints were marching in towards victory 12-7 when coach tried to score just more touchdown to fortify their lead. The fateful pass got picked, and the Saints were trailing at the half 14-12.

In the second half, the Tornadoes — with one player at 5’11” and two players almost as tall — were the first to score, but the Saints responded with a TD and with extra points tied the game at 20-20.

Turning Point scored and then time ran out on the Lighthouse push to counter the score.

“The kids should hold their heads up high,” Coach Nate said. “They pulled a lot of flags. Our guys are just beginning to grow and just beginning to figure out how to run. They played great. I hope they had fun. We should only remember those plays that worked right.” This story originally appeared on the Santa Monica Patch here.

Pastor Charles was talking about how each Christian has at least one gift from God, and how we all need to use our gift to help out in the church. As I was listening to the sermon, I realized I must have the gift of criticizing.

The church really needs someone to whip everyone into shape, so immediately after the service I marched off to let Sister Winnie know that as the cleaning lady for the church, she was doing a very poor job. I pointed out a certain area that she had left dusty and disorganized from Saturday.

She broke out in tears, but no matter. I went off quickly to tell Elder Eli that his Sunday School teaching was particularly boring and that he ought to add more jokes into it. I turned my back on him eager to continue using my gifting from God. I found Walter and told him his tie did not go with his pants. Timothy was right there listening, so I finally told him that the way he laughs annoys a lot of people in church, and that he should learn how to laugh like a normal human being.

He turned red with anger, but, hey, the truth hurts, right? I was looking for Sister Martha to tell her to stop judging others when my dad caught up with me and pulled me out to the car by my arm. He gave a big lecture about not hurting people’s feelings. But I told him that I was just exercising my gifting. He was pretty mad at me.

So, here I am, trying to figure out where I went wrong. Boy, just when you try to do something right, everyone doesn’t know how to appreciate you. Here’s what I say: A prophet is not without honor except in his own household.

Whadda we need missions for anyway??

I don’t see why we have to do missions. I mean, isn’t God in control of everything anyway? So He can take care of giving those people the gospel. I’ve learned He’s sovereign. That’s a big fancy word which means He does whatever He wants and nobody can stop him.

And while I’m wondering, why do we have to evangelize? People can see a Bible any time they want to. Even if they don’t have one at home, when they go to a hotel, they can always find a copy in the drawer. So it’s their problem if they don’t read it.

Our church just sent Pablo and Frieda to the foreign field, and I’m pretty sore. I’m going to miss them. Pablo was a young adult that I really liked, a cool guy who led youth group. He would always talk to me and be friendly. Who cares about the foreigners who don’t have Jesus? That’s their problem. This is not to mention all the money that will be spent over there. It’s a waste.

I got really mad on Sunday. Elder Eli was teaching Sunday School, and he was talking about bringing souls into the kingdom. He said it was the responsibility of everybody and that we all should think of ways to bring people into the church.

Well, I couldn’t hold back my comments. I said that the reason more people don’t come to church is because it’s so boring. I mean, why do we have to use the Bible all the time? I suggested we play Halo 4 in Sunday School. Then we could get a whole bunch of kids to come. It would actually be fun to go church, with all that killing and stuff. You know, stuff that us kids like.

Would you believe that Elder Eli didn’t like my idea? First he was scowling. Then he thanked me but said it wasn’t something for church. How can it not be for church? I mean, a halo comes from an angel, right?

That’s the last time I offer my good advice.

Wow! Today in church the pastor was really inspiring! He was talking about heroes of the Bible and how they did great things for God. How they used faith to take on giants and false prophets and evil emperors. I really felt like God spoke to me. I even went up to the altar and asked Him to use me.

So today, I’m going to pray that I, too, will stop being the ho-hum Christian and go out in the world and conquer and triumph! With all this Holy Spirit energy, I’m ready to fulfill my purpose in life: I’m going to get the high score on Modern Warfare III.

I wouldn’t be caught dead with a Bible in the streets. The kids at school would never let me live it down. So, when it comes time to go to church, I’m always forgetting it, even though Dad scolds me. You see, there’s a short window of opportunity, when we go from the car into the church, that I could potentially be seen on the street by one my classmates. Then it would all be over.

Actually the Bible-forgetting lends itself perfectly to a major goal in life that I have – to get an iPhone. I keep telling Mom that I could download the Bible onto the iPhone, and then I would never forget it for church. So far, Dad and Mom keep using lame excuses like we don’t have enough money. So I’m going to keep dropping hints and pressuring until I wear them down. Mom, will be the first to break. Then, Dad won’t be able to say no to her.

You aren’t even hardly a person if you don’t have a cool smartphone. The other day in Sunday School, the teacher slid an iPhone across the table so that one of the older kids could call the main teacher. We hadn’t noticed his iPhone before. There was a collective “Ooooh!” when we saw it.. After class, a lot of the kids circled around him and wanted to see his phone and chattered a bunch with him. His rating with us kids just went way up.

Why don’t parents understand important stuff like this? Dad scowls and says a phone is for making calls. He doesn’t understand that things like status and image are important to us. If I had an iPhone maybe even Rose would notice me. But as it is, I’m a bottom-dwelling fish, doomed to uncool by uncool parents.

I checked on my mountain of gum that I am secretly building under the pew in  church, and I’m happy to report that it still has not been discovered and removed. I have been working on it for five months — one piece of gum every Sunday.

I call it my volcano, but I suppose that’s not the best term because it’s upside-down. Maybe I should call it a stalagmite — or stalactite. I forget which. In any case, this is my secret project. Only a few friends know about it.

What surprises me though is that no one has found it. I mean, the pastor is always going on about how everybody needs to serve in the church. So I guess they’re not doing very well.

It’s getting to the point where I am thinking about actually measuring it, so its progress could be scientific — you know, like they do with the global warming and the disappearance of polar ice. But the problem is: How to do it without getting caught? I guess it’s easy to stick a wad of freshly chewed gum. But if I pull out a ruler and stoop under the pew, it would draw too much attention. I spent over half of the sermon thinking up a way to do it. Before I knew it, the service was over, and I didn’t even get bored.

I even wore a tie on Sunday, but Rose didn’t notice.

Oh, hi. My name is Manuel.  My dad told me I need to write on his blog once a week. He said I should write about my relationship with God. I’m gonna name this the Blog of the Wimpy Christian because that is like my favorite book. My dad’s favorite book is the Bible.

So I was telling you, I’m praying for Rose. She’s the hottest girl in the church. But she doesn’t even know I exist. So I don’t know much about this prayer thing.

As I was saying, I even wore a tie, which is really uncool for a teenager. You see, Rose likes this guy Walter, who is one of those teenagers who says “Amen!” and “Hallelujah!” when the pastor preaches.

I would never say, “Amen!” or “Hallelujah!” during the sermon or all the teenagers would stare at me like I was from another world. That would be the end of me. I’d be excluded from friendships. Once you say “Amen!” during a sermon, you get classified as “One of Strange Church Members.”

Putting a tie on was already a huge risk all by itself. A few of my friends pointed at me and snickered. I like took this huge risk for her, and she didn’t even turn her head. So since it didn’t seem to work, I won’t do it again.