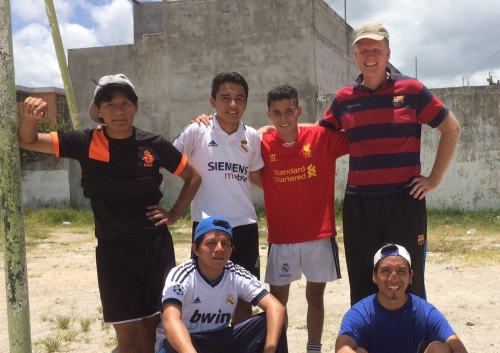 Guess which one is me.

It was an incredibly lopsided score, a thumping to leave our opponents embarrassed for the rest of their lives. Their team was four players, and we were only three.

Actually, we were trying to get as many goals as years I’ve lived on Earth as of today: 48. But the other team quit.

To be fair, I personally made only three goals. And as best as I can remember, the 10 goals made against us were all my fault.

Yes, the victory was because of Mario and Banner Ajcip, exceptional footballers and brothers of the Door Church in Guatemala, where I pastored, where I learned to play soccer. Those two guys teach in our school, and we played against the students of our Christian school.

It felt like being on Jesus’ team. He lets you participate. He lets you feel like your doing something. You work hard. You make mistakes. But he brings the inevitable lopsided victory.