Incarcerated for a schoolyard murder, a psychologist told 12-year-old Ronnie Legg there was no forgiveness available to Him from God.

“I was like, ‘Wow, I’ll never be able to get into Heaven,” he says on a video published by a Texas outreach group. “I might as well be the devil’s #1. As soon as I was found guilty and sentenced to 21 years, I started pushing hard to try to do the devil’s work. I was pushing hard to be the ultimate gangster.”

Ronnie’s troubles began early: a single mom, abused as a tyke, living in poverty. For selling drugs on the wrong street in East Houston, his brother was killed. Nine-year-old Ronnie followed in his footsteps with drinking and smoking dope.

His mother, brokenhearted at the loss of one son, steeled her heart against what she thought was the inevitable demise of Ronnie.

“There’s no more love here for you because you’re going down the same path your brother went down,” his mom told him. “You ain’t going to do nothing different, so I’ll be danged if you break my heart.”

Ronnie responded to the rejection by throwing the first object he could find at her.

At age 12, he was on the schoolyard when a group of young gangsters tried to jump him. But they didn’t count on Ronnie being armed and he shot three of them, killing one. He was arrested four days later. Even without a jailhouse confession, prosecutors secured a conviction. 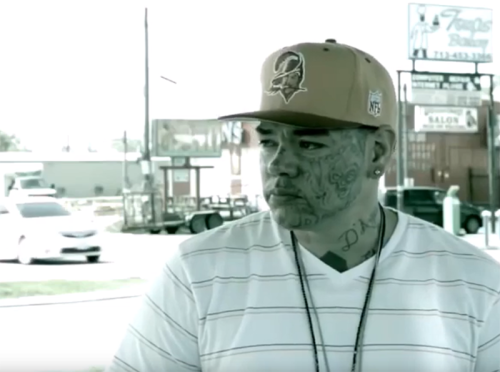 By age 15, he was in the penitentiary because he was so dangerous. While there, he joined the Houstone Blast gang and fought every day to make a name for himself.

“As I started doing that, everybody was patting me on the back,” he recalls.

Released from prison, he trafficked dope, pimping and kidnapping in Houston.

In December 1999, the Feds tracked him down. It seems his best friend snitched on him. Sentenced to 72 months, he got into trouble in prison so much that his sentence was lengthened to 9 years and 4 months and then into 12 years.

“I ended up walking around some of the worst prisons in the whole United States,” he says. He was in Beaumont prison during the racial riots. He was transferred to Oklahoma and then to Pollack, Louisiana. Of 100 Texans in Pollack, only he and another survived.

Ronnie eventually was transferred to a Death Row penitentiary in Indiana. In Victorville penitentiary, he was thrown in with the Crips and Bloods. It didn’t matter to him that he was the only Houstone. Almost immediately, he stabbed someone on the yard.

Finally, he was transferred to the “Alcatraz of the Rockies” in Florence, Colorado, the “worst of the worst. Everybody there is a killer. Three people a day get stabbed,” Ronnie says.

When he was admitted, the warden gave him one warning:

“All I ask is that you don’t put no steel in my officers.”

When he was finally released, Ronnie went home and immediately resumed drug trafficking.

He got busted for a crime he didn’t commit. Read the rest: Houstone gang Christian.