Christian poet Les Murray, ranked among the greatest, rose from a painful past

Out of “enforced poverty” in the Australian hinterland, out of schoolyard bullying, out of the raw pain of his mother’s untimely death and his father’s subsequent breakdown, Les Murray discovered he had an unmatched gift, the gift of poetry, which he dedicates in his volumes “to the glory of God.”

Today, Murray is heralded as one of the top four living English poets (the Atlantic ranks him as #1), and against the hurricane of God-hostile universities, artists and media influencers, Murray deploys his farmer wit and grit, his expansive genius and his poetic dexterity to provide a Herculean push back: Those “who lose belief in God will not only believe in anything. They will bring blood offerings to it.” 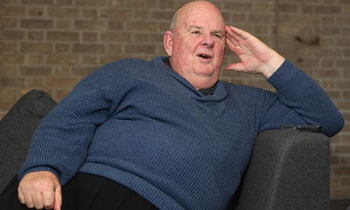 The 79-year-old has published about 30 volumes over 40 years and opened a center of gravity to counter what Psalm 2 describes as the “raging heathens.”

Born in Nabiac of Australia’s New South Wales to Scottish immigrant lineage, Murray grew up roaming the countryside, glorying in its surreal beauty, at once punishing and spectacular. He and his family lived in a plank hut with linoleum applied directly to the hard dirt floor. They raised cattle and cut timber. More often than not, Murray walked around barefoot, not by choice but because of financial constraints that he blames on the share-cropper conditions imposed by his grandfather on his parents. He was “kept poor.”

He didn’t receive a formal education until he was nine, at which time he was ridiculed in school for being overweight. Specifically, when he was a teenager, girls taunted him, pretending to make a sexual insinuation only to suddenly disappoint him and giggle at his awkward mortification. It became a cruel sport they engaged against an easy scapegoat, and it branded him an outsider for the rest of his life.

“I’ve always known that I was a subhuman redneck. We were told that early in life,” he told ABC news. “Kids who wore the school uniform, to them we were subhuman. They laughed openly at us.”

If school was nightmarish, worse demons arose at home. His mother died when he was 12 after a string of miscarriages. His father fell into a breakdown, and the young Murray felt guilty for his mother’s death while he was saddled with taking care of his father.

When he attended in 1957 the University of Sydney, Murray felt unleashed from these burdens.

“My Mum died and my father collapsed. I had to look after him, so I was off the chain at last,” he said in Wikipedia. “I was in Sydney and I didn’t quite know how to do adulthood or teenage. I was being coltish and foolish and childlike. I received the least distinguished degree Sydney ever issued. I don’t think anyone’s ever matched it.”

He befriended some of the cultural elites he would later repudiate; he was appalled by their snobbish self-righteousness and moral morass.

Murray liked languages and cut through them as Japanese steel slices butter. He also was drawn to poetry. He devoured all of Milton in one weekend when he was 16. Hopkins and Eliot remain a strong influence.

His preponderant intellect is ballasted by his poor-born earthiness. He can “read more than 20 languages, and lift the back of a motorcar by hand,” according to his biographer, Peter Alexander.

Playing Satan in a passion play at college, he met the girl who became in 1962 his wife, an immigrant from Budapest named Valerie Morelli. At was at this time that he adopted Catholicism as his Christian branch of choice. The couple have five kids. After traveling Europe, the couple resettled in Australia – ultimately deciding in 1985 to reside in his native Bunyah Valley where he wandered as a child.

After some early years working as a translator, Murray dedicated himself completely to poetry. His oeuvre includes so much natural terrain that it’s tempting to classify him with the pastoral poets, but Murray transcends the genre with a keen biologist’s eye.

If Romans says the creation of the world reveals God, Murray turns a keen eye and ear to discern God in multifaceted flora and fauna.

In “Bat’s Ultrasound,” Murray mimics the bats radar chirps with English words. It’s an inversion of “Jabberwocky” in which Lewis Carroll makes up words so that they sound like English; here Murray uses vowel-heavy words focusing on air (the bats medium). Confounding the reader, Murray ends the poem by mentioning “Yahweh.” He is saying that he hears God even in the bat’s cry.

In “The Craze Field,” Murray takes his reader to the crackled dry lakebeds and drought-stricken watercourses of Australia. In the parched sand, he evokes the badlands of the Dead Sea and descries ancient texts: Those “who lose faith in God will not only believe in anything. They will bring blood offerings to it.”

The quote is from G.K. Chesterton, the WWII-era British luminary who blew the whistle on Europe’s slide into atheism and consequent moral rankle. With no moral moorings, socialist countries massacred millions.

The delight of poetry is searching for its meaning, much like a Where’s Waldo book satisfyingly entertains those who pour over its vast cartoons looking for the red-capped Waldo. When you look up all the words and research the allusions, you thrill at the “Aha!” moment.

Murray, however, is anything but inscrutable. As a matter of fact, he has waged war on his post-modernist contemporaries not only for their skepticism but for their inaccessibility. From T.S. Elliot’s “The Wasteland” onward, post-modern poets have prided themselves on the ample use of Latin and esoteric allusions that leave their poems well beyond the comprehension of everyday readers.

This is where Murray stays true to his roots. Stung by condescending peers, he grounds himself firmly in the wisdom and words of common folk, the aboriginals and poor whites of the Australian bush.

Murray is the push back from the Outback.

To call Murray a Christian poet is inaccurate. He is a poet who happens to be Christian. Not all of his poems exude didacticism. He takes up all the styles and subjects of poetry; in his repertoire there are bawdy poems and poems about depression. They’re not pretty ditties good for illustrating sermons; they are pieces of art that weigh the good, the bad and the ugly of life.

Somewhere between grievance and grief, Murray found God. But as an honest poet, he’s no pretender. He’s courageously and candidly spelunking into mental caverns. His 2009 book Killing the Black Dog: A Memoir of Depression combines prose and poetry to sort through years of grappling with crippling negativism. It features Freddy Neptune, his depressive alter ego.

His most recent bout with depression was provoked by an old fellow student who came to his poetry reading in New South Wales. He had just turned 50, and she playfully reminded him of her torments, recalling one of the barbs with which she had pierced him three decades earlier.

Murray landed in the hospital and languished through two years of darkness. He suffered 3-4 panic attacks daily and couldn’t muster the energy to rise from bed to go into the other room to get a book. He took Xanax to blunt depression’s edge following his emergence from a coma brought on by liver disease.

After that brush with death, Murray decided reclaim his congenial spirits and to kill “the black dog,” Winston Churchill’s name for the mental disorder. He now thinks he suffers from Asperger’s. Continue reading Les Murray Christian poet.