To my young mind, there was no doubt about it. Christmas was all about getting — as much as I could. A funny thing happened, that toy that looked like so much fun on the commercial… well , you know…

Helping One Voice divide up fruits and vegetables into bags for their Christmas baskets.

Something happened in the intervening years. I discovered the joy of giving. Disneyland was fun because it was fun to see my kids have fun. I gave even my life to the mission field — 16 years in Guatemala.

I just sent down a bunch of shoes. Poverty is such that shoes are among the hardest thing to come by for the natives (who work in our school and get paid a pittance because it is semi-self-supporting). My daughter is expert at firing through size, sex and price so that it didn’t become an hours-long ordeal.

Giving is more satisfying that getting. Try it this year. Instead of begrudging the lack of Christmas presents, volunteer at a food distribution center. We helped One Voice in Santa Monica prepare food baskets. 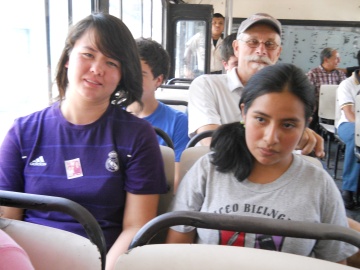 Jenny, at right, with my daughter. She’s so shy that she doesn’t smile in front of the camera.

I just got off the phone with Pastor Ludving in Guatemala. His daughter, Jenny, has some problem with her eyes, but he stopped treating it with the doctor because of lack of money. All donations in December and January through my Donate option (PayPal) will go to her.

Once you start, how do you stop? 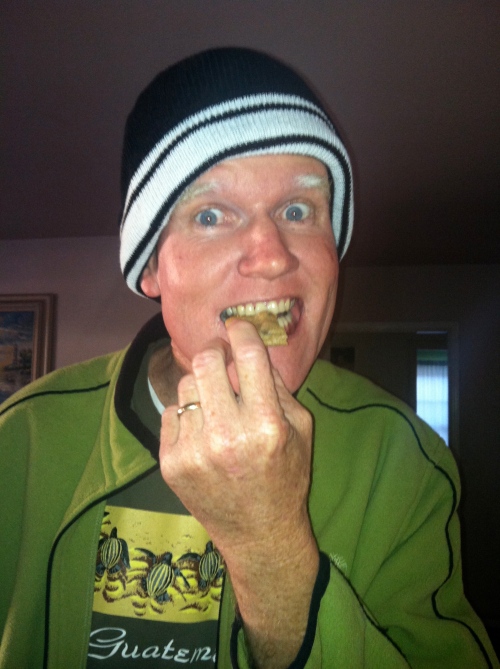 The man behind the MustardSeedBudget ravenously devouring Christmas cookies. 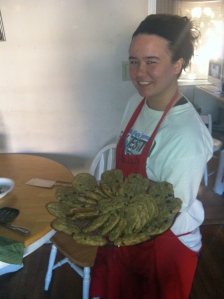 These cookies my daughter bakes are soooo good. I never eat them; I flee them; they’re dangerous. But she insists that I must try. Reluctantly, I relent. They have more than chocolate chips: marshmallows and crackly red and green sugar crystals. Needless to say, the exquisite ecstasy produced instantaneous addiction. I threatened to NOT stop with the broken cookies. I would need a 12-step program to break off gobbling them up 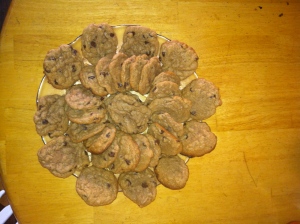 I bet my friends of the photo blogs could take a much better picture of these delights.

One menacingly look from Rebekah was enough to deter me. When she was younger, she obeyed me. It’s biblical. But now that she is 16 years old, I have to obey her. No one warned me this switcheroo would happen. She’s enough for anyone to go cold turkey. As Rob’s friends know well, you don’t mess with Rebekah. 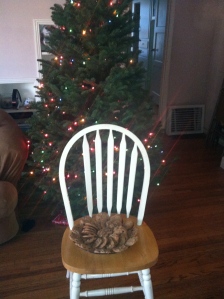 Becky has been making me feel less Grinch-like. When I was missionary in Guatemala, I was a gringo. But now, I’m a Grinch. Making the transition from belt-tightening missions to spendthrift USA has not been intuitive. She plays Christmas carols incessantly and prevailed on my wife to get a Christmas tree. So the effects have been to put me in the mood. And now, I just wanna wish everybody a Merry Christmas! My Savior was born (probably not on this date), and He could be your Savior too!

I guess I had better read my morning blog about exercise, now that these tantalizing temptations are beckoning. Where’s Rebekah? I need to sneak another one!

Maybe we should report those cookies to DEA. You might be dreaming of a white Christmas, but I’m dreaming about green and red sugar crystals.