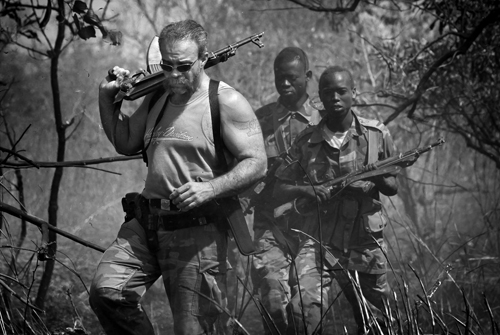 By age 11, he was doing dope. At 13, dropping acid. After he turned 15, he was sticking a needle in his arm, shooting cocaine and heroin.

“I went in deeper into selling drugs. I’m not talking about small amounts. I’m talking about large amounts of drugs. I kept going deeper until I became the shotgunner, the hired gun for drug deals,” Sam Childers says in a Next Step film.

Childer’s wife, Lynn, can take the credit for wrangling this rebel into the Kingdom of God. She was an ex-church-kid-turned-stripper who fell in love with the bad boy. They did drugs together. But eventually, Lynn, despairing of pigs’ portions in her prodigal path, returned to Jesus.

This did not sit well with the renegade outlaw. For two years, he fought her to give up her “religion.”

Then Childers got into a shootout in a barroom over a drug deal gone bad.

He showed up for revival services in an Assembly of God church in mid-1992, surrendered his heart and life to Jesus, and was born again.

The pastor prophesied that night that Childers would minister in Africa.

Remarkably, Childers went from biker gang member and barroom brawler to eventually becoming a preacher. When he became a Christian, he didn’t give up the guns. He kept them handy for what would become very dangerous work overseas.

His first mission trip to Uganda was a 5-week stint building roofs in a village where there were landmines. While there, he happened across the legless body of a boy decimated by a landmine placed by Joseph Kony’s insurgency. Kony, a brutal warlord, had been conscripting child soldiers, perpetrating mayhem throughout the region.

When he saw the condition of the boy, Childers smoldered with rage.

“I returned home. I couldn’t sleep. I couldn’t hardly eat,” he recalls. “All I could see in my memory was children that were starving.”

In response, he sold his fishing boat, camper and other possessions to raise funds for Africa. He tried to enlist others in the fund-raising.

On a subsequent trip, he felt God tell him to open an orphanage, situated in the hottest thicket of danger. In that Valley of the Shadow of Death, he linked up with Sudan People’s Liberation Army, which granted him his own militia to protect the orphanage — and to battle Kony’s forces, according to the Washington Post.

He became known as the “Machine Gun Preacher” after a documentary on his life revealed him walking the bush of Sudan with an AK-47 slung over his shoulder, deep in the warzone of Kony’s insurgency. Read the rest about the Machine Gun Preacher Sam Childers.

‘Sheriff of Skid Row’ ministers while he arrests

For 20 years, he’s patrolled the most dangerous, smelliest, grungiest disease-saturated section of Los Angeles, a one-square-mile on the edge of downtown called Skid Row where 2,000 sleep on the streets each night.

And Deon Joseph loves it because he gets to share Jesus. He’s never used his gun and has made more friends than arrests. He’s started mentoring and self-defense programs and even become a sort of spokesman to city officials about the need to address mental health issues.

“We need to be lights in dark places,” Joseph told Liberty University students. “If ever the world needed us to be a light, it’s right now.”

It’s only a 15-minute jaunt from the hipster-dominated financial district of downtown. But for some, the journey to Skid Row is a life of bad decisions that lead to the last way station before death.

“When I was 5 years old, I wanted to be a famous R&B singer,” Joseph said. “I did not realize my steps were ordered by God to be on Skid Row. I never thought I would be dealing with crack addicts, drug dealers, loan sharks, pimps and prostitutes.”

Joseph was born to Christian parents who, through the years, welcomed 41 foster kids into their household. His dad got saved when he mugged a preacher. He married his mom, dug ditches, collected cans, fed the homeless and started a construction business to give work to people like him, who had grown up in the Jim Crow South.

When Joseph finished his LAPD training phase, he volunteered for Central Division, not realizing it would lead him into the heart of darkness.

Skid Row is now being called the “homeless capital of America.” It’s the product of anti-police policies and NIMBYs (the acronym Not In My BackYard is for homeowners who wish to corral all the trouble-makers into one bad area of LA), Joseph said.

“I came from Venice where you have beautiful women, lattes and fine eateries,” Joseph remembered of his first day in Central. “And when I worked in Skid Row, it was as if I tripped and fell into Dante’s Inferno or Mad Max’s Thunderdome. 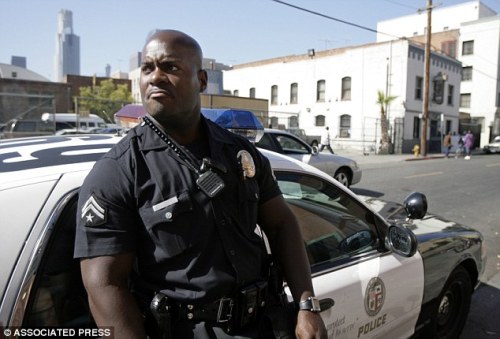 “There were rows and rows of people destroying themselves with crack and heroin, beer, having sex on the sidewalk, defecating on the sidewalk with a porta potty right next to them because the gangsters wouldn’t let them use the toilet,” he said. “The smell was a combination of blood, feet and fish. It grabbed you by the nose hairs and shook you.”

Despite the dehumanizing exploitation and the desensitizing constant crime, Joseph fell in love with the beat.

“Why am I in this place that could easily be compared to hades, and I’m comfortable?” he asked his mom. “My mom said, ‘Son, if ever you feel comfortable in chaos, it’s probably where God called you to be.’ On Skid Row I realized I was home.”

It was never easy though. On his first two months, he worked the front desk where he saw firsthand the mayhem.

“Every five minutes somebody was coming in with their arm broken backwards at 45 degrees, lacerated cheeks, swollen eyes,” he said. “One guy came in and his intestines were hanging out. And they didn’t want a police report because they were that scared of their attacker. All they wanted was an ambulance to whiz them away to the hospital.”

He formed friendships with mentally ill people – only to see them die tragically months later.

One such was “Hurricane Linda,” who knocked over desks at the station, ripped out phones and spat on officers. Joseph was nervous the day she came in like the Tazmanian Devil. Spotting him, she directed a laser gaze on him that made him even more nervous. Read the rest of the story.