We shook them up 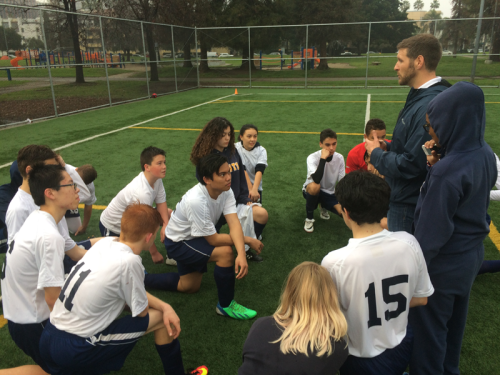 Since they steamrolled us in our first game, Einstein Academy expected to win handily on the rematch Friday. One player even heckled a Saint: “I guarantee that there is no way we will lose this game.”

Well, Lighthouse Christian Academy made them sweat to earn their win. LCA rattled their nerves and hacked their hubris. And even though the Saints went down 1-6, the Christian kids from Santa Monica could hold high chins by the final whistle.  With only one club player and a former club player, the Saints had stood tall against a high school team of 10 club players of varsity soccer.

“You guys don’t give up,” said Einstein coach Ken Erenberg. “I thought that was great about your team — the whole game they kept fighting through, no matter what the score was. They kept fighting. You got that goal at the end. It was the never die. It was nice to see that.”

Indeed, it took the Rockets 25 minutes to break down the Saints dogged defense.

In the first match, the Einstein players had notched two goals in the first 10 minutes. And then they stepped off the gas pedal and coasted to an easy 0-6 victory.

But on Friday, Coach Erenberg sounded frustrated as his team couldn’t manage to open the deadbolt. The Rockets keeper too scolded his team.

It was a different Saints team. On the first matchup, the Saints were presumptuous. They were on a 3-game winning streak that included the shock defeat of last year’s champs. As they oozed confidence, they lacked concentration. Since they took to the field thinking they’d win without even having to play, the Saints crashed and burned terribly. They committed enough errors to make the discriminating soccer observer turn his nose inward face palms.

The scoreline –0-6 — was a humiliating wake-up call and could have been far worse, except that the Rockets sent on their second string for some practice in the second half.

On Friday, the fierce determination of the underdog Saint was back with a vengeance, and a growing alarm in the voice of the shouts from the sidelines and on the field was evident.

Ultimately, the Saints committed an error, and the Rockets buried the ball in the net for their first at 25 minutes. By halftime, they had three goals, all products of a lapse of concentration and the lack of experience.

As the score crept upward, Coach Jack Mefford noted that Einstein did NOT take off their star player, #43, this time — a move that credits LCA’s improved performance.

As the minutes crept towards the final, the Saints refused to cower like a dog with its tail between its legs. They continued to press, and their resilience paid dividends. Read the rest of the article.